Battle of Paoli, The 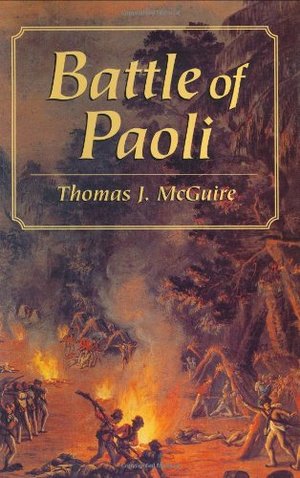 Thomas J. McGuire
In September 1777, George Washington and his generals, beset by bad weather and chronic shortages of ammunition, food, and clothing, were fighting a war with green troops. Recently defeated at the Battle of Brandywine and troubled by state factionalism among his men, Washington was searching for a strategy to keep the encroaching British out of Philadelphia. He detached Gen. Anthony Wayne's division of 1,500 Continentals to a camp south of the Schuylkill River, near Paoli, Pennsylvania, to harass British Gen. William Howe's flank and slow its progress. British troops led by Gen. Charles Grey discovered Wayne's position and attacked by night. The encounter was so brutal, it became known as the Paoli Massacre. According to author Thomas J. McGuire, the slaughter at Paoli, though a defeat for the Americans, united the troops and helped to rally more soldiers to the cause of independence. Drawing on never-before-published sources, including the personal papers of many of the men involved, McGuire brings to life many facets of the struggle. Starting with the events leading up to the battle, the book explores the conflicting loyalties of the civilians and soldiers, the frustrations of the fledgling Continental Army, and the attitudes of the British toward the rebels. The battle itself is then brought to life in vivid detail, revealing both its pageantry and its pathos. A discussion of the aftermath of the encounter explains what the defeat and the loss of Philadelphia meant for the Americans in terms of morale and unity, and concludes with the court-martial of General Wayne, who had been accused of negligence. The Battle of Paoli helped to shape the American strategy for winning independence from Britain at a time when victory was far from certain. "Battle of Paoli" tells the compelling story of how a small event can impact the outcome of a much larger struggle.