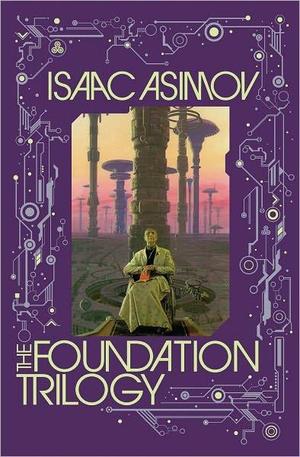 Isaac Asimov
A landmark of science fiction's "Golden Age," Isaac Asimov's Foundation Trilogy-which comprises the novels Foundation, Foundation and Empire, and Second Foundation-has long been regarded a visionary masterpiece whose astonishing historical scope perfectly conveys science fiction's sense of wonder. First published as a cycle of stories in the 1940s and '50s, Asimov's iconic trilogy has endured to become, like the author himself, a legend of science fiction. Set in the far future, Foundation envisions a Galactic Empire that has thrived for 12,000 years, but whose decline into an age of barbarism lasting some thirty millennia is imminent-if the predictions of renegade psycho-historian Hari Seldon are accurate. Hoping to shorten the interval of this impending new Dark Age, Seldon convinces the Empire's Commission of Public Safety to allow him enact a diversionary plan-one full of surprising subterfugres and intrigues intended to create and protect a Foundation on which the future Empire will be erected. Foundation and Empire advances the story farther into the future, in which a technologically advanced Foundation

@bookadvice
Reviewed: 2017-09-11
10.5H
@s0mnia
Reviewed: 2015-06-21
Have found no problem with this book. It's a beautifull simulation of one man's idea and the universe crumbling to pieces and revitalising. It may be dry at times and characters come and go quickly, but the most important character in the books, the Foundation itself, deeply evolves.
Item Posts
@edbury2y 4mo
began ... on 2018-05-09
© 2020 libib.com / All rights reserved