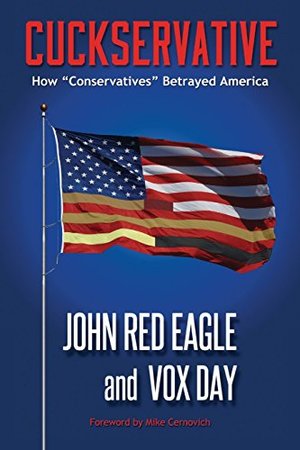 Vox Day, John Red Eagle
Fifty years ago, America was lied to and betrayed by its leaders. With virtually no debate, Congress passed the most radical change to immigration law in American history. Since 1965, America has endured the biggest mass migration of people in human history, twice the size of the great wave of immigration into the USA between 1870 and 1930. As a result, Americans are being displaced in their own land by an ongoing invasion that dwarfs Operation Barbarossa, is two orders of magnitude larger than the Mongol hordes, and is one thousand times larger than the First Crusade. America's so-called conservative leaders and the conservative media have joined forces with liberal internationalists in openly celebrating this massive invasion, relying on bad theology, outdated economics, and historical myths to falsely claim that immigration is a moral imperative, an economic necessity, and in the national interest. Cuckservative: How "Conservatives" Betrayed America is a powerful defense of America's right to exist as a nation by two Native American authors, as well as a damning indictment of a conservatism that has failed to conserve America's culture and traditions. This powerful and remorseless book addresses the myth of the Melting Pot, proves that mass immigration is a net negative for the U.S. economy, and exposes the anti-Christian ideology behind the Christian establishment's support for multiculturalism and open borders. It even shows how 50 years of immigration have lowered America's average IQ. The authors pull no punches in conclusively demonstrating that it is not right, it is not moral, it is not economically beneficial, and it is not Constitutional to betray America's posterity. In Cuckservative, John Red Eagle and Vox Day warn Americans that if they do not defend their culture, their posterity, and their nation, they will eventually find themselves on their own Trail of Tears.