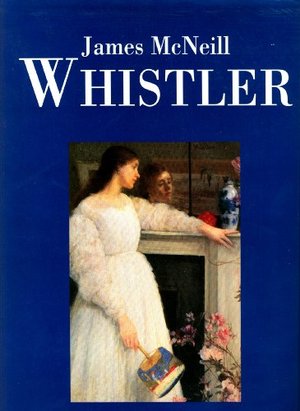 Maria Constantino
A beautiful oversized coffee-table book of art by James McNeill Whistler. - The American-born painter and graphic artist James Abbott McNeill Whistler is usually associated with the Impressionists, although his creative output has also been linked with both the Symbolist and the Aesthetic movements. During his youth, Whistler spent several years in Russia, and only began to pursue an artistic career after his discharge from West Point. In 1855 he traveled to Paris, where he immersed himself in the treasures of the Louvre, was influenced by Japanese woodblock prints, and became a devotee of Velazquez. In Paris, he associated with figures such as Baudelaire, Courbet and Manet, but at the close of the 1850s moved to London, where he would be based for much of his remaining life. Whistler achieved critical acclaim at the Royal Academy exhibition of 1860, but also courted controversy: in 1877, for example, John Ruskin described his Nocturne in Black and Gold: The Falling Rocket, as "flinging a pot of paint in the public's face." Whistler successfully sued for libel, but was awarded little in recompense and was left bankrupt by the case. He returned to London reinvigorated. The years that followed brought him great fame and many honors. A portrait of the historian Thomas Carlyle was brought for a substantial sum, and the French state, which was to make him a chevalier of the Legion d'honneur, purchased perhaps his most famous work -- Arrangement in Grey and Black: Portrait of the Painter's Mother. If Whistler is a lavish monograph of one of the 19th-century's most fascinating artists. Renowned for his dandyism and lavish life style. he associated with many of the great figures of' his age, including Dante Gabriel Rossetti and Oscar Wilde, and also left an impressive artistic legacy. With reproductions of over 80 of' Whistler's greatest works and an introduction detailing his life and times, this book is an ideal introduction to an innovative and controversial artist.