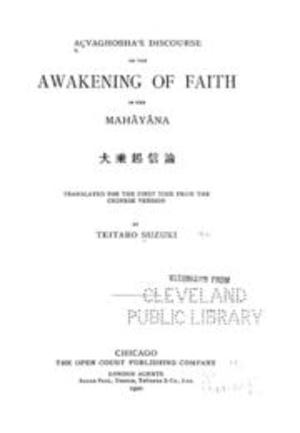 Teitaro Suzuki
Book Description: "Asvaghosa's The Awakening of Faith is one of the most concise works on Mahayana Buddhism, and was translated at an early date from the Sanskrit to the Chinese. The original Sanskrit text is lost. The Awakening of Faith has been used as a textbook for Buddhist priests. This translation was the first into English; it is by Teitaro Suzuki, one of the principal writers on Buddhism of the 20th century. Suzuki, a Zen Buddhist scholar, manages to convey the difficult sense of this work, which sometimes requires inventive English neologisms. For the perplexed, there is a glossary at the end of the book." (Quote from sacred-texts.com)Table of Contents: Publisher Preface; Translator's Preface.; Note.; Introduction.; Date.; Nativity And Peregrinations.; Appellations.; Conversions.; Lists Of Patriarchs.; As An Artist.; Works In Chinese Translations.; Chinese Translations Of The "discourse On The Awakening Of Faith."; Outlines Of The "discourse On The Awakening Of Faith."; Adoration.; Discourse.; Introductory.; General Statement.; The Explanation.; The Revelation Of The True Doctrine.; The Soul As Suchness.; The Soul As Birth-and-death.; The Threefold Significance Of The MahÂyÂna Explained.; The Refutation Of False Doctrines.; Five False views Held By Those Who Believe In A Personal Atman.; Belief In The Existence Of Atman In Things.; Ways Of Practising The Right Path.; Practice Of Faith.; Benefits.; Glossary.; EndnotesAbout the Publisher: Forgotten Books is a publisher of historical writings, such as: Philosophy, Classics, Science, Religion, Esoteric and Mythology. www.forgottenbooks.orgForgotten Books is about sharing information, not about making money. All books are priced at wholesale prices. We are also the only publisher we know of to print in large sans-serif font, which is proven to make the text easier to read and put less strain on your eyes.