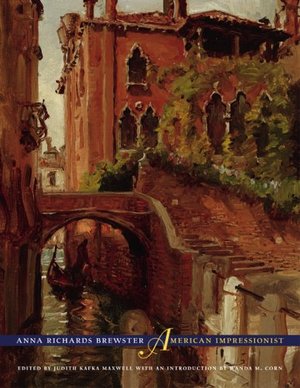 Anna Richards Brewster, American Impressionist is the first in-depth study of an artist whose name is not well-known today but who was one of the most successful women artists of her time. This beautifully illustrated book, catalog to the exhibition of the same name, provides a fascinating look at the turn-of-the-twentieth-century art world as experienced by a woman artist. Anna Richards Brewster (1870-1952) began painting at age ten, studied with William Merritt Chase and John LaFarge, and trained at Académie Julian in Paris. She was a prolific painter of landscapes, portraits, and illustrations who showed her work regularly until the 1930s. In this volume, curator Judith Kafka Maxwell revives Brewster's work while exploring the contradictions common to women like her—those whose professional ambitions were neither supported nor encouraged by institutions or patrons. An introduction by Wanda M. Corn situates the artist in her social and cultural milieu, and essays by art historian Leigh Culver and American historian Kirsten Swinth explore the works themselves, the artist's education, and the post-Civil War rise of women artists. The result is a rich history of an artist and her time that makes vivid the obstacles faced by female artists in the early twentieth century.