Playing By the Rules 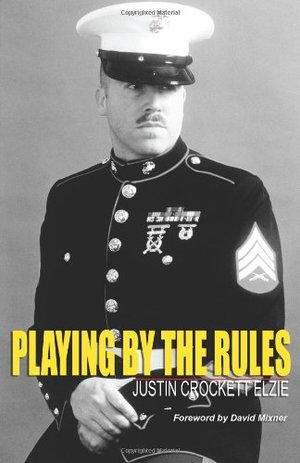 Justin Crockett Elzie
The military has lots of rules and they are all expected to be followed. United States Marine Corps Sergeant Justin Elzie, wanting to make a difference, followed a rule of integrity and came out publicly on ABC Evening World News in January 1993. He became the first Marine discharged under Don't Ask, Don't Tell, and later reinstated, becoming the first Marine to challenge Don't Ask, Don't Tell with a Federal Court Case and went on to serve four years openly gay. Justin Elzie takes you on a journey of self-discovery from his early years growing up on a farm in Wyoming to joining the Marine Corps and finding an underground gay subculture within the military. He was described by his superiors as an exemplary Marine with two meritorious promotions, being named Marine of the Year and having served as an American Embassy Guard. After coming out he was recommended for promotion and served as a Platoon Sergeant in charge of Marines on a ship and in the field. He testified at the Senate Hearings opposite General Schwarzkopf, participated in the MTV show Free Your Mind and was photographed by Richard Avedon for the New Yorker. His story appeared on ABC, CNN, NPR and in The New York Times. Playing By The Rules is one man s struggle for acceptance by his parents, the Marines and the realization that when you play by the rules there are some things that can t be taken away from you.