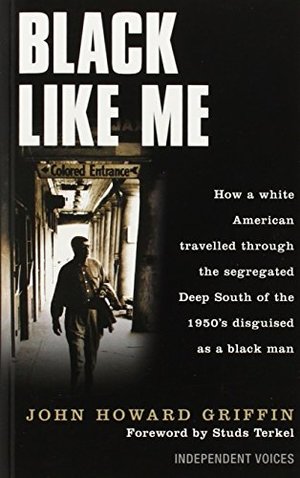 John Howard Griffin
Black Like Me, first published in 1961, is a nonfiction book by white journalist John Howard Griffin recounting his journey in the Deep South of the United States, at a time when African-Americans lived under racial segregation. Griffin was a native of Mansfield, Texas, who had his skin temporarily darkened to pass as a black man. He traveled for six weeks throughout the racially segregated states of Louisiana, Mississippi, Alabama, Arkansas, and Georgia to explore life from the other side of the color line. Sepia Magazine financed the project in exchange for the right to print the account first as a series of articles.

@mg469
Reviewed: 2018-11-06
It was a bit of a slog to get through this book, it's so badly and stiltedly written, and so presumptuous in its willingness to speak on behalf of all black people (despite the fact that when the going got slightly tough the author called some white friends to pick him up and put him up at their house!). The dated language doesn't help. The author also takes it as a given that he isn't prejudiced because he's now 'one of them' but then speaks about hoping black people don't 'bare their fangs' at white people. Yikes. An extra star for the epilogue written in the 70s and which was actually terrific - written in an entirely different style, advocating actually listening and deferring to the lived experience of black people in the US. The additional biographical chapter at the end is also very good - what a life! - but I wish he'd re-written the book in his later voice.
Item Posts
No posts
© 2020 libib.com / All rights reserved