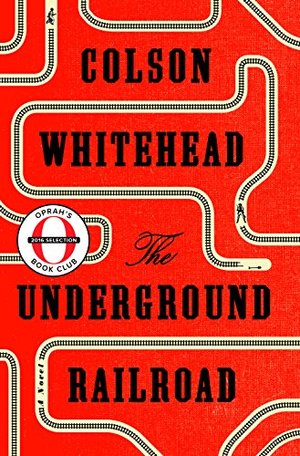 Colson Whitehead
The Newest Oprah Book Club 2016 Selection   From prize-winning, bestselling author Colson Whitehead, a magnificent tour de force chronicling a young slave's adventures as she makes a desperate bid for freedom in the antebellum South Cora is a slave on a cotton plantation in Georgia. Life is hell for all the slaves, but especially bad for Cora; an outcast even among her fellow Africans, she is coming into womanhood—where even greater pain awaits. When Caesar, a recent arrival from Virginia, tells her about the Underground Railroad, they decide to take a terrifying risk and escape. Matters do not go as planned—Cora kills a young white boy who tries to capture her. Though they manage to find a station and head north, they are being hunted.      In Whitehead’s ingenious conception, the Underground Railroad is no mere metaphor—engineers and conductors operate a secret network of tracks and tunnels beneath the Southern soil. Cora and Caesar’s first stop is South Carolina, in a city that initially seems like a haven. But the city’s placid surface masks an insidious scheme designed for its black denizens. And even worse: Ridgeway, the relentless slave catcher, is close on their heels. Forced to flee again, Cora embarks on a harrowing flight, state by state, seeking true freedom.      Like the protagonist of Gulliver’s Travels, Cora encounters different worlds at each stage of her journey—hers is an odyssey through time as well as space. As Whitehead brilliantly re-creates the unique terrors for black people in the pre–Civil War era, his narrative seamlessly weaves the saga of America from the brutal importation of Africans to the unfulfilled promises of the present day. The Underground Railroad is at once a kinetic adventure tale of one woman’s ferocious will to escape the horrors of bondage and a shattering, powerful meditation on the history we all share.

@aldfkjalkjdfalf
Reviewed: 2021-01-19
I abandoned this so quickly that I don't have much to say, other than:

- it's poorly written. Not amateur, but no literary craft

- the laundry list of all the usual slavery-drama set dressing is there . . . and nothing more (other than the underground railroad itself)

A big case of "can't be bothered" with this book.
@katewilburn404
Reviewed: 2020-11-04
Given the very important nature of this book, I tried really, really hard to enjoy it. It certainly was very gripping, dark and attention-grabbing at times. I felt the character development really lacked, I felt no personality from either Cora or Ceasar and had difficulty with the author's style of randomly delving into the backstory of previously non-important characters. We went back and forth from present to past to future quite too often for me personally to be able to keep track of who and when we were talking about.
@alexbauman
Reviewed: 2019-11-21
It's great to have a really well written novel featuring a strong, thoughtful, runaway slave woman as a protagonist, certainly a type that is underrepresented in historical fiction. Not sure how I feel, though, about the central motif of the book in which the underground railroad is an actual underground railroad. On the one hand, it's a powerful metaphor that can then be used to drive the story along, and it does a great job of that. But I'm a little nervous that the magical realism of the railroad will cause some readers to doubt the realism in the depiction of the violence pervasive in plantation slavery, which can feel surreal at times. It just seemed like the way the narrative relies on the railroad eventually makes it feel less magical, could also make the brutality of the plantation eventually seem a bit less real. But it is still an impactful novel and the railroad metaphor contributes to the brilliant range of discussion-worthy features in the book.
@ginadavidson
Reviewed: 2018-07-18
Read for class. One of the best books I've read so far this year. Makes me want to read more of his work.
@areedcollett
Reviewed: 2018-06-17

This was a powerful book.  It did not try to lighten the dangers for people of color during the slavery period.  It also showed the risks which people took to help escaped slaves on their travels North.  Every place that Cora traveled to in order to escaped always had a dark side, either on the surface or hiding in the shadows.  I enjoyed the book, but I was saddened for many of it characters.

Brilliant through and through, from concept to technique and story. But it is brutal.
-mm

This is a very dense but easily readable 300-page book. It's hard to describe what exactly about it didn't click for me. The underground railroad being an actual railroad seems somewhat inconsequential to this slave story. It's a premise a 4th grader would come up with, with all this beautiful sadness overlaid on it, masking its silliness. The characters had a lot of quirk. A unique point of view. Sorry this is rambly. It's just so hard to describe.