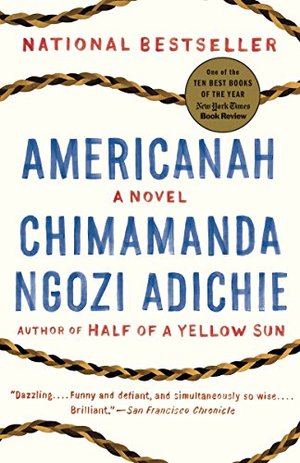 Chimamanda Ngozi Adichie
One of The New York Times's Ten Best Books of the YearWinner of the National Book Critics Circle Award for FictionAn NPR "Great Reads" Book, a Chicago Tribune Best Book, a Washington Post Notable Book, a Seattle Times Best Book, an Entertainment Weekly Top Fiction Book, a Newsday Top 10 Book, and a Goodreads Best of the Year pick.A powerful, tender story of race and identity by Chimamanda Ngozi Adichie, the award-winning author of Half of a Yellow Sun. Ifemelu and Obinze are young and in love when they depart military-ruled Nigeria for the West. Beautiful, self-assured Ifemelu heads for America, where despite her academic success, she is forced to grapple with what it means to be black for the first time. Quiet, thoughtful Obinze had hoped to join her, but with post-9/11 America closed to him, he instead plunges into a dangerous, undocumented life in London. Fifteen years later, they reunite in a newly democratic Nigeria, and reignite their passion—for each other and for their homeland.

May: **** Powerful and relatively fast read.

Every man, woman and child in the US and Nigeria should read this book. It's funny, sharp, charming and will make you say "Yes, girl" at least once every chapter if not every page.

Adichie delivers a compelling narrative which delves into the psyche of post-colonial Africa and the conflicts and complications which her diaspora face abroad. While Adichie's writing in itself is only decent, she is nonetheless able to weave a complex, nuanced, and deeply empathetic narrative which will not fail to move and provoke the reader in equal measure.

Another masterpiece, though her previous book (Half the Yellow Sun) is even better. This book should be required reading for any American. Funny, moving, introspective- it has everything.
-mm

Love love loved this book! The style, the story, the realness of everything. I really enjoyed it and was so engrossed at times that the world around me seemed to disappear. Those are my favorite books, the ones that suck me in completely. I will definitely be looking into reading her other works.