Empire of Storms (Throne of Glass) 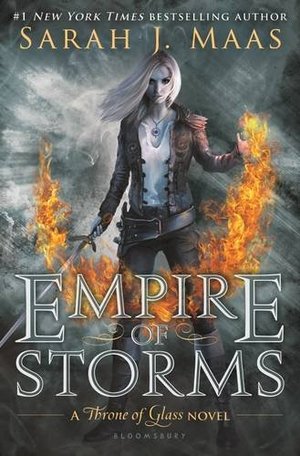 Sarah J. Maas
Kingdoms collide in Sarah J. Maas's epic fifth installment in the New York Times bestselling Throne of Glass series.The long path to the throne has only just begun for Aelin Galathynius. Loyalties have been broken and bought, friends have been lost and gained, and those who possess magic find themselves at odds with those who don't.With her heart sworn to the warrior-prince by her side, and her fealty pledged to the people she is determined to save, Aelin will delve into the depths of her power to protect those she loves. But as monsters emerge from the horrors of the past, and dark forces become poised to claim her world, the only chance for salvation will lie in a desperate quest that may mark the end of everything Aelin holds dear. In this breathtaking fifth installment of the New York Times bestselling Throne of Glass series, Aelin will have to choose what -- and who -- to sacrifice if she's to keep the world of Erilea from breaking apart.

This was my first review of 2017, and believe me, this was a complex review to type back then and worst now since I read it a second time in 2021. I’m enjoying the Throne of Glass series, and I’m sad to know I will finally finish reading this series. I’ve held off on finishing this series because I don’t want it to end, but I know it does end. If you haven’t started this series and love the Young Adult genre with fantasy elements, I recommend starting this series.

Storyline/My Thoughts: I love strong, kick-butt female characters, and Aelin Ashryver Galathynius is definitely one of those characters. Empire of Storms starts with the characters ending up in Aelin’s homeland, but unfortunately, they are not very welcoming. They believe she is not the ruler they want due to her taking so long to get back. They want to prove she can be Queen of Terrasen. They also are scared of Aelin’s power. Aelin is determined to win back Terrasen. Unfortunately, she’s going to go through so many tribulations in this book. She finds out the truth of what needs to happen to send back Erawan. She also finds out the price of what happens.

Let me just say in this story, and I love Rowan even more. He has been my favorite male character in this story due to who he has become since the third book. He is very protective of Aelin for a particular reason that will be unveiled in this book.

I do not want to go into the story much because I don’t want to spoil it for anyone who hasn’t read this book or series. There are many action-packed and dramatic scenes in Empire of Storms and a lot of romance too. Not the too steamy kind like you will find in Adult Romance books, but it’s there.

Be prepared to be on the edge of your seat at the very end of the book. I was not prepared for how the book was going to end. I thought Erawan was the biggest issue that Aelin had to deal with, but unfortunately, she will face someone far worse.

Standalone or Part of series: It’s part of the Throne of Glass series.

Would I recommend this book? Yes. I highly recommend this book to readers that need to be distracted for a while and placed in a world of powerful Fae, evil demons, and an all-powering, loving group of characters that will follow the main character Aelin anywhere. This series has prevented me from getting into a reading slump this year, and I look forward to reading the next book in the series. I don’t want to finish the series. I have to because it’s been sitting on my bookshelves for so long. I held off for so long. I hope I don’t have my heart broken, but I know Sarah J. Maas will give me an epic end to this series.

I've successfully finished the entire series and have to wait for the new book to come out next year at 2018. I love this book as well as the other books and im sad to have finished this. Aelin and Rowan has been mates and just realized!!! And the last part is what hit my feelings and heart the most. I cant believe it. Time for ROwan to save Aelin....