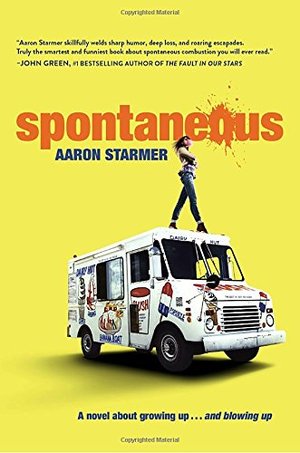 Aaron Starmer
"Aaron Starmer skillfully welds sharp humor, deep loss, and roaring escapades. Truly the smartest and funniest book about spontaneous combustion you will ever read." —John Green, #1 bestselling author of The Fault In Our StarsA darkly funny and spectacularly original exploration of friendship, goodbyes—and spontaneous combustion.  Mara Carlyle’s senior year is going as normally as could be expected, until—wa-bam!—fellow senior Katelyn Ogden explodes during third period pre-calc.Katelyn is the first, but she won’t be the last teenager to blow up without warning or explanation. As the seniors continue to pop like balloons and the national eye turns to Mara’s suburban New Jersey hometown, the FBI rolls in and the search for a reason is on.Whip-smart and blunt, Mara narrates the end of their world as she knows it while trying to make it to graduation in one piece. It's an explosive year punctuated by romance, quarantine, lifelong friendship, hallucinogenic mushrooms, bloggers, ice cream trucks, “Snooze Button™,” Bon Jovi, and the filthiest language you’ve ever heard from the President of the United States.Aaron Starmer rewrites the rulebook with Spontaneous. But beneath the outrageous is a ridiculously funny, super honest, and truly moving exemplar of the absurd and raw truths of being a teenager in the 21st century . . . and the heartache of saying goodbye.★ "A blood-soaked, laugh-filled, tear-drenched, endlessly compelling read." —Kirkus, starred review

Relationships, teenage angst, and spontaneous human combustion; the formula to a senior year that Mara won’t soon forget -- that is, if she lives long enough to even graduate. What happens to a small northwest community when high school seniors start exploding in school? With the government taking special interest in these students, and no explanation as to why this is happening, Mara and her best friend team up with Special Agent Lady Nightshade to unveil the sinister activity taking place at Covington High. Mara gives the reader a highly-biased viewpoint of the events taking place at the school with her over-the-top sarcasm and uncouth sense of humor that is disturbingly funny. The way the chapters are formatted makes this book a page-turner until the final moments. This book is highly recommended for readers looking for something new and exciting, with characters that are devilishly charming and relatable. Submitted by: Allison Hart