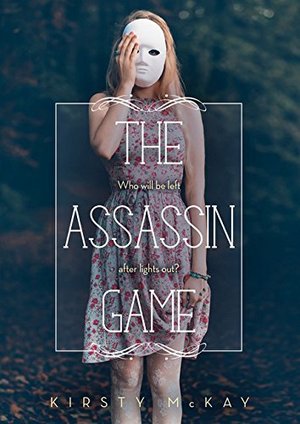 Kirsty McKay
T.A.G. You're It..."It is 4 a.m. when they come for me. I am already awake, strung out on the fear that they will come, and fear that they won't. When I finally hear the click of the latch on the dormitory door, I have only a second to brace myself before-"At Cate's isolated boarding school Killer is more than a game-it's an elite secret society. Members must avoid being "killed" during a series of thrilling pranks-and only the Game Master knows who the "killer" is. When Cate's finally invited to join The Guild of Assassins, she knows it's her ticket to finally feeling like she belongs. But when the game becomes all too real, the school threatens to shut it down. Cate will do anything to keep playing and save The Guild. But can she find the real assassin-before she's the next target?

@ruthsic
Reviewed: 2018-01-25
Secret societies is the theme of The Assassin Game, and in this book, the kids of Umbraville, a private boarding school is the setting. Honestly, the combination of this alone would have opened up so much potential, as also the fact that the school is isolated from the mainland by tides. Perfect for thriller books. And sadly, that didn't live up to its potential. The start was slow (which I forgive, as I always do) and towards the middle the action picks up, but throughout this the book it lacks the element of real danger. Only in the second half, do things become deadly and the ending a bit scary, but otherwise I was more or less disappointed that the book wasn't more thrilling. The Guild was also a bit of cliche - teenagers playing make-believe and creating hierarchies.

Part of this is because the protagonist is kind of bland - Cate is boring, and her boy troubles are exhausting. She seems like she is different, but she also bows down to the Guild like they are some savior group. Also, her outsider-in-a-school-of-genius thing really doesn't offer much to the plot, as does her absentee parent past. She is mostly a wasted character, because there was so much that could have been done there. Vaughan was truly shady and I had my eye on him as the killer for quite some time. It should be mentioned that in the start, Cate is shown to be a little freaked out by stalking, but I did not understand why really - it was only a game at that point; no real element of danger, only the possibility of embarrassment/humiliation. And some things in the plot didn't add up - like why was she kept in the sick bay on pills (!) or why the police were so incompetent. The identity of the killer was also a letdown, because it was what I was expecting and wasn't exciting enough with the motive.

The writing was okay in some parts and good in others. Some scenes really came alive while others not so much. Characterization could have been better and not made it a cookie cutter ensemble. Overall? I would say it had a promising plot but failed in executing it.

Received a free galley from Sourcebooks Fire, via Netgalley, in exchange for an honest review/
@mrslabraden
Reviewed: 2016-12-04

The Assassin Game begins with a fairly preposterous premise.  A private school called Umfraville located on a small deserted island off the coast of Ireland is owned by Cate's family allowing her to reside at the school and take all of her high school classes there.  Most of the students come from money or have some special talent.  "The Game" is legendary at the school.  Certain students are chosen to be initiated and become part of "The Game." The object is to survive "The Killer," who sets out to "kill" each of the other particpants before anybody guesses who he or she is.  When Cate is finally initiated, a boy from her past reappears, and everything about "The Game" changes as real murder attempts start happening on the island.

The book was very well written and kept my attention enough for me to read it in one sitting.  The problem I had with the book was that I didn't really like any of the characters very well.  Even Cate, who is the main character could have opted out of "The Game" at any point in the story, and possibly stopped what can only be called organized bullying that school officials turned their backs on even though they knew all about it.   An interesting read, but not very much fun.