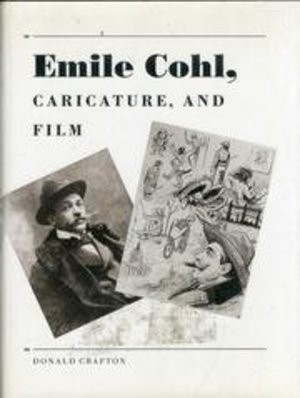 Donald Crafton
This is the definitive biography of Emile Cohl (1857-1938), one of the most important pioneers of the art of the animated cartoon and an innovative contributor to popular graphic humor at a critical moment when it changed from traditional caricature to the modern comic strip. This profusely illustrated book provides not only a wealth of information on Cohl's life but also an analysis of his contribution to the development of the animation film in both France and the United States and an interpretation of how the new genre fit into the historical shift from a "primitive" to a "classical" cinema. "Beautiful in look and design, with stunning reproductions from films and newspapers, Emile Cohl, Caricature, and Film offers a biography of a figure who virtually created the European art of animation... In its theory and history, the book is one of the most important contributions to [the field of animated film]. But [it] is central for film study per se, offering a fresh, exciting look at the complicated world of early cinema."--Dana Polan, Film Quarterly Originally published in 1990. The Princeton Legacy Library uses the latest print-on-demand technology to again make available previously out-of-print books from the distinguished backlist of Princeton University Press. These paperback editions preserve the original texts of these important books while presenting them in durable paperback editions. The goal of the Princeton Legacy Library is to vastly increase access to the rich scholarly heritage found in the thousands of books published by Princeton University Press since its founding in 1905.