Hating Game: A Novel, The 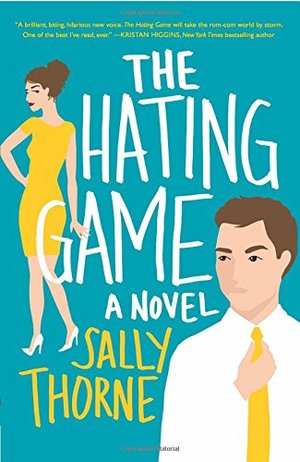 Sally Thorne
Debut author Sally Thorne bursts on the scene with a hilarious and sexy workplace comedy all about that thin, fine line between hate and love.Nemesis (n.) 1) An opponent or rival whom a person cannot best or overcome.                       2) A person’s undoing                       3) Joshua TemplemanLucy Hutton and Joshua Templeman hate each other. Not dislike. Not begrudgingly tolerate. Hate. And they have no problem displaying their feelings through a series of ritualistic passive aggressive maneuvers as they sit across from each other, executive assistants to co-CEOs of a publishing company. Lucy can’t understand Joshua’s joyless, uptight, meticulous approach to his job. Joshua is clearly baffled by Lucy’s overly bright clothes, quirkiness, and Pollyanna attitude.Now up for the same promotion, their battle of wills has come to a head and Lucy refuses to back down when their latest game could cost her her dream job…But the tension between Lucy and Joshua has also reached its boiling point, and Lucy is discovering that maybe she doesn’t hate Joshua. And maybe, he doesn’t hate her either. Or maybe this is just another game.

@rottgrl88
Reviewed: 2020-10-07
I'm glad that I picked this book up. I really enjoyed the story and the male character, Joshua Templeman. He was great and swoon-worthy. I felt he was the perfect hate-to-love book boyfriend character. The relationship that he had with Lucinda Hutton was great. The way their relationship developed throughout the story was done very well. I will say that this book's genre is listed as Adult Fiction / Contemporary / Romance. I don't agree with this. I say that it should be listed as New Adult. I wouldn't consider it to be 100% of New Adult but it has a little more sexual content and strong language then Young Adult but the writing style was a little less mature to be considered Adult Fiction. Just my opinion. Also, the writing style itself regarding characters communicating with each other was a little confusing at times as the way the author has it spaced on the page. It isn't really indicated to whom is talking and on some occasions I had to guess who was saying what. Which was a little annoying.

Something else that bugged me which caused the rating to go down was the fact that Lucinda had some frequent "immature, clingy" moments. They seemed to really go against her character from the first part that we were introduced to her. I can understand if the main character has flaws and they grow out of them during the progression of the story. But, this was almost done in reverse. When we first meet Lucinda, she is strong willed and aggressive with Joshua and yet still a push over in some other aspects of her life. Then as the story goes and she and Josh start displaying affections for each other, she begins to show really bad "clingy-ness" qualities and pretty much begs him for "sexual" relations. I really think the author could have done a better way of working this personality trait out with Lucinda. Other than that, I had no issues with the story. I had the plot already figured out 3/4 the way through the story, so the ending was predictable. But it was still a good read and I would recommend it.
@zairhazerdane1
Reviewed: 2020-06-26
Love Josh! His romantic ways and just a totally enjoyable book. Love love Luncinda!
@kristynrene
Reviewed: 2019-05-05
4/5 Stars

Maybe it was because of how alive I felt. So completely young and filled to bursting with the scary, thrilling certainty my life was about to change in a big way...No, it was something else; the new knowledge of something irreversible, permanent. It cycled through my head with each revolution of the car’s wheels, each pulse of blood in my frail whisper-thin veins.

This novel!!!! I felt like I was reading a gender bent Jim VS Dwight. I fell in love with this book the same way I fell in love with The Office. Enough said. Absolute magnificence.
@scaredofspiders
Reviewed: 2018-12-26
I have complex feels about this book. It struck me in ways I normally don't experience but may have to get used to.
Specifically, the height and general size difference hit so close to home: I am not a small lady but my love has 13" of height on me. I don't even reach his shoulder unless he slouches. Which he does. Deliberately. So I can reach him. ... ... SWOON.
I liked that it was white hot almost as soon as it started THEN went slow burn. I got a little erotic jolt and hooked on the clever sniping almost all at once. I guess it's hard for me to believe a slow burn without some spark near the beginning of the book. It doesn't have to be at the beginning of the couple's relationship just relatively soon after I start reading about them--without that I'm always side eyeing the supposed intensity of the attraction. I guess my thought is, if it's something that you can control all of the time, how passionate can it really be?
I loved how batshit fucking crazy Lucy was. I related so hard to that. She's this capable, intelligent woman filled with insecurity and broken coping mechanisms. She gets terrified by true and tender emotions. She deflects with humor and tangents. How could I not relate utterly?
Josh is his own bundle of brilliant professional bundled with insecurity and bone deep fear. He gets to have the upper hand, in this book, though, and it's honestly pretty sexy.
Also, I read it in an ~8 hour sitting. I've been miserably sick for over a week.

Bottom line: should you read this book? I'm not here to tell you what to do but the first thing I did after finishing it was look up the author's other books and add them to my to-be-read list.
@bookaddictguide
Reviewed: 2017-12-07
Initial Impressions 8/17/17 + review as posted on The Book Addict's Guide 10/16/17: 4 - 4.25 stars
Well, this book was so incredibly enjoyable! I haven’t read an adult contemporary novel in a very long time (most of my non-YA reads tend to be fantasy or mystery) and this was so much fun! I tend to avoid adult contemporary at large because I like reading to have fun and don’t particularly enjoy reading about more serious realistic topics (divorce, babies, cheating, break-ups, blah blah I know that’s not all adult contemp but you know what I mean) but THE HATING GAME was on sale at Audible in a 2-for-1 sale and I had heard such great things from bookstagram that I grabbed it! Thank you, bookstagram.

I agree with my friend Brittany when she told me that the beginning was better than the ending (hence the four stars and not five). I LOVED the beginning of this book and the hate-fire that fueled the tension between Lucy and Joshua. It was tense, exciting, funny, and sexy. I loved those shared moments when you could tell they hated each other so much that they didn’t hate each other anymore. It was absolutely perfect and I loved how this relationship developed!

The ending was also wonderful too. I loved how the book resolved, how both characters really grew, and how the reader learned so many different things about each character’s past by the time the story concluded. It was romantic and brilliant and I could read so much more about Lucy and Josh (except for the fact that the awesome hate-tension wouldn’t be there anymore). I loved their personalities, especially Lucy, and how this book really came to life.

Mild Spoilers: The only thing I was missing was that I wished the “Hating Game” part of the book had gone on longer. The book starts out with Lucy and Josh positively despising each other and I thought that could have gone on just a bit longer and Sally Thorne could have established their relationship (the hate side) a bit more before breaking that sexual tension. The tension was so fantastic that I just wanted it to keep going, and I thought it should have lasted just a bit longer. I enjoyed watching that hate dissolve and Lucy and Josh still spurring each other on all the while, but it almost felt like the resolution of the book started a little too early and it lost a little momentum. You want to keep reading to see when that breaking moment happens and it just broke a little too early, I thought.