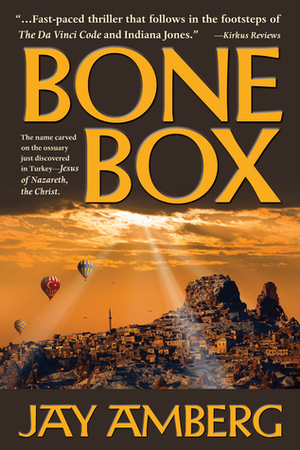 Jay Amberg
On a hill overlooking the Aegean Sea in Turkey, an international team of archeologists discovers a stone box that first-century Jews used to rebury their dead. The box’s Aramaic inscription: Jesus of Nazareth, the Christ. Sophia Altay, the beautiful French-Turkish archeologist who heads the team, tries to keep the discovery secret until she can authenticate the ossuary. She knows that people will kill to obtain the relics—and to suppress the box’s other contents, documents that could alter Western history. Joseph Travers, an American sent to Turkey to evaluate the archeological dig, soon finds himself pulled into the web of betrayal, reprisal, and violence. In his journey through Istanbul’s mosques and palaces, the archeological sites around ancient Ephesus, and, ultimately, the strange and mystical terrain of Cappadocia, he comes to understand the epochal meaning of the bone box.