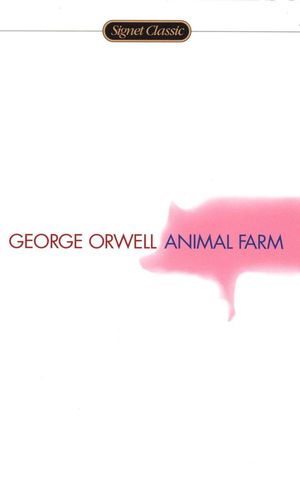 George Orwell
Manor Farm is like any other English farm, expect for a drunken owner, Mr Jones, incompetent workers and oppressed animals. Fed up with the ignorance of their human masters, the animals rise up in rebellion and take over the farm. Led by intellectually superior pigs like Snowball and Napoleon, the animals how to take charge of their destiny and remove the inequities of their lives. But as time passes, the realize that things aren't happening quite as expected. Animal Farm is, one level, a simple story about barnyard animals. On a much deeper level, it is a savage political satire on corrupted ideals, misdirected revolutions and class conflict-themes as valid today as they were sixty years ago.

I don't know how often I've reread Animal Farm but, reading it again this morning, the opening paragraph felt like a much loved poem learned in childhood. Heartbreaking though it is, it still gives me huge hope when the animals rise up against the farmer's tyranny. The loss of their more (if not completely) selfless leaders leaves them at the mercy of the power-grabbing Napoleon. And then the story follows the path of so much of human nature. The lust for power and wealth dominates and class warfare ensues, disguised as nationalism or religion or whatever else is handy.
We learned, in school, to relate this story to a particular time and place, but it is clear now that human nature is largely universal and the story of those who would pursue power at any cost is repeated across time and place. It is every bit as powerful today as when Orwell wrote it.