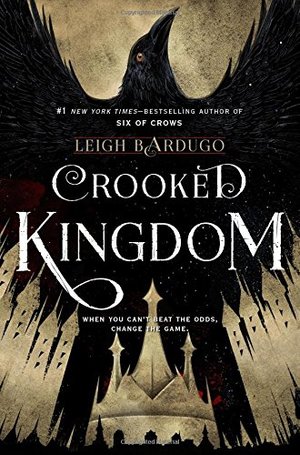 no mourners no funerals my ass

After absolutely devouring Six of Crows, I dove right in to Crooked Kingdom. It took me a little while to read both because it's enormous and I started it in the middle of exams. But once I got all my tests done, I spent an evening reading the last hundred pages and also dying.

There were a few things I knew were going to happen (that death for example) due to internet spoilers, but they didn't take away from my reading experience. I never knew *how* characters were going to get from point A to point B, and they constantly surprised me with their plans and backup plans. Like, a thing that worried me? Was actually all part of the plan. Leigh Bardugo's mind must be running in 3D to create the characters and plots that she does in this series. Every twist felt earned and where the characters ended up felt right.

Inej is probably my favorite character. She's been through so much and come out the other side. She sacrificed a lot, and to get her see her version of a happy ending meant a lot. I also appreciated Kaz's character, especially the aspects of his disability. As someone who also has mobility issues (though in my feet not my leg), I appreciated seeing a character in a high fantasy setting who shared that pain. And also to have him still be badass despite that pain.

While Inej was my favorite and I related to Kaz, I also loved Wylan, Jesper, Kuiwei, Nina, and Matthias. They all added a flavor to the book that was needed for it to succeed. I especially enjoyed Wylan's plot line and the stuff with his mother. I know Nina features in the next duology, and I'm excited to see how she's doing after everything.

Like everyone else has already said, I highly recommend these books, and I think they can be enjoyed whether or not you've read the Grisha trilogy!

@bookworm0719
Reviewed: 2018-05-31
If you have not read Six of Crows by Leigh Bardugo, this review my contain spoilers for Six of Crows but not Crooked Kingdom. Crooked Kingdom picks up right where Six of Crows left off. Kaz, Inej, Nina, Matthias, Jesper and Wylan pulled off the their heist in the Ice Court by bringing Kuwei Yul-Bo back with them but Jan Van Eck didn't keep to his part of the bargain. Instead he takes Inej which leaves Kaz to come up with a plan. He always seems to be one step ahead even when we don't think he could possibly have a plan for when things go wrong, he does. Out of the two books, Six of Crows and Crooked Kingdom, Crooked Kingdom is my favorite. My love for the characters grew even more after reading Crooked Kingdom. We learned so much about them in Six of Crows so I wasn't expecting a lot of back stories in this one but we did and I was loving all of it. Nina and Matthias are seriously the cutest! Of course, Kaz and Inej are great and we get to see a lot of more about Inej's background. And Wylan and Jesper continue with their teasing and they are all so great! The character development throughout this story is phenomenal. I think the character of Matthias was just amazing. He had it burned into his brain since he was a child that Grisha should be destroyed and he changes his view on that despite what he was taught. I feel like growing up, a lot of us are taught something and it is really difficult to change your mind on it because it's what you have always believed. And for Leigh to create this character, Matthias, showing how hard it is for him to turn on his people and fight for what he thinks is right is just incredible. The plot of the story was so good! There were so many things that I didn't see coming and just the fact that Kaz had everything so well planned out was just so great. Leigh Bardugo's writing makes me feel like I am right there with the characters. There's one part at the beginning when Inej is climbing through a air duct and I just had major claustrophobia while I was reading it. Even though I was in the wide open space of my house, I felt like the walls were closing in on me. I don't usually get this kind of impact with writing. There were even some cameos of some characters from the Grisha trilogy which was kind of fun to see them again, despite me not really liking that series. I also loved that Wylan finally came to accepting himself as not being able to read. He has struggled for so long and has always been embarrassed by the fact that he can't read. I love him as a character and I don't want to see him hurt. Of course, there was a part in the book where I was full on crying for him and my heart was just aching. So I'm not much of a crier when it comes to books. I get teary eyed but not full on crying. Leigh Bardugo is now the second author to make me full on cry. And several times at that! Just beware going into this book that it is very emotional but it is done in the best way possible. The ending of the book was perfect. Probably the most wonderful book moment EVER! Tears were streaming down my face but I was so happy with the way it ended. Six of Crows and Crooked Kingdom are now my favorite duology. This story took me completely by surprise, in the best way possible and I'm so happy to have read them. Highly HIGHLY recommend!
Item Posts
@jennyio2mo 24d
completed ... on 2021-11-02
@jennyio3mo 8d
began ... on 2021-10-19
@howaboutadance4mo 19d
completed ... on 2018-03-09
@howaboutadance4mo 19d
began ... on 2018-03-05
@howaboutadance4mo 20d
began ... on 2018-06-25
@howaboutadance4mo 20d
completed ... on 2018-06-30
@howaboutadance4mo 20d
began ... on 2019-03-25
@escapinginpaper7mo 13d
completed ... on 2021-06-12
@escapinginpaper7mo 13d
began ... on 2021-05-11
@tween2teenbooks8mo 14d
completed ... on 2021-05-11
@bjezerey1y 3mo
completed ... on 2016-10-10
@bjezerey1y 3mo
began ... on 2016-10-10
@seahrar2y 3mo
completed ... on 2019-10-21
@seahrar2y 3mo
began ... on 2019-10-19
@mdorrence2y 5mo
completed ... on 2019-08-09
© 2022 libib.com / All rights reserved