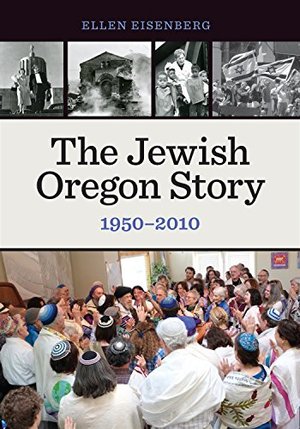 Ellen Eisenberg
The Jewish Oregon Story traces the history of diverse Jewish Oregonians and their communities during a period of dramatic change. Drawing on archival sources, including a collection of over five hundred oral histories, the book explores how Jewish Oregonians both contributed to and were shaped by the “Oregon Story,” a political shift that fueled Oregon’s—and particularly Portland’s—emerging reputation for progressivism and sustainability. Six chapters examine a community grappling with, and increasingly embracing, change—from the dramatic national shifts in women’s roles and inter-group relations to local issues such as the razing of the historic South Portland Jewish neighborhood. An original community musical, Whatever Happened to Old South Portland?, frames the creation of a new Portland Jewish identity, emerging out of the ashes of South Portland and tapping ethnic expression as an antidote to suburbanization and assimilation. A peek behind the scenes exposes the crucial role of women’s voluntarism and traces the impact of women entering the workforce and winning acceptance as equals in organizational and ritual life. Chapters on involvement in liberal politics and advocacy for Israel explore communal engagement that reflected national trends, but, beginning in the 1980s, were increasingly shaped by emerging local progressivism. A final chapter charts recent shifts in Oregon Jewish geography, demographics, and organizational life, exploring the rebirth of smaller communities and the embrace of post-denominational Jewry, spirituality, and an ethos of environmentalism and inclusion. The Jewish Oregon Story will be of great interest to the Jewish community in Oregon and the Pacific Northwest and will appeal broadly to all readers of American, Western, and Oregon history, particularly those interested in questions of ethnicity and identity. Published in Cooperation with the Oregon Jewish Museum and Center for Holocaust Education