Apology for the True Christian Divinity, An 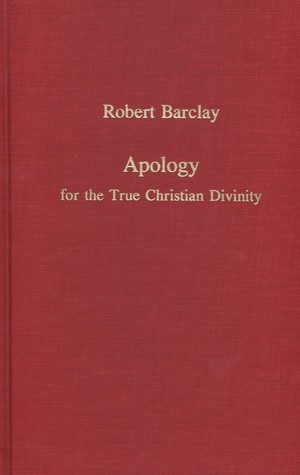 Robert Barclay
Robert Barclay (1648-1690) wrote his classic exposition and defense of Quakerism in Latin and published it in 1676 as Theologiæ Vere Christianæ Apologia. He then translated his own book into English. The Apology has since been reprinted over 60 times and translated into several other languages. Barclay's education enabled him to understand academic theology. Most early Quaker publicists used a distinctive Quaker vocabulary which was often misunderstood by educated theologians, whom the Quakers misunderstood in turn. Thus in early debate literature, Friends and their opponents often talked past each other, taking the same words in different senses. Barclay bridges this gap, defending Quaker usage while clearly explaining it for the benefit of those who were accustomed to a different vocabulary. This is not to say that the theological differences between Quakers and other sects were mere differences of vocabulary. There were doctrinal differences of substance; and most of Barclay's effort is directed at defending Quaker doctrine and showing its superiority, in logic and faithfulness to Scripture, to competing doctrines of his time, especially those of Calvinism. His ability to do this effectively is greatly enhanced by his having a good understanding of the competing theologies, as well as by his ability to surmount the verbal barrier. The Apology was frequently reprinted throughout the 18th and 19th centuries. Suddenly, early in the 20th century, the printings ceased. The last printing of the full text, so far as we have been able to learn, was in 1908 in Philadelphia.