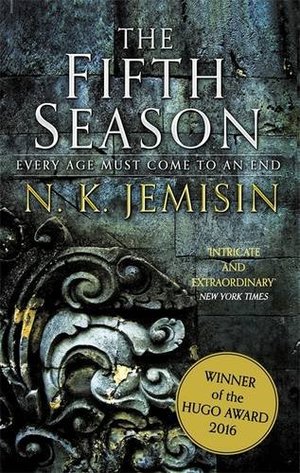 "Intricate and extraordinary." - New York Times on The Fifth Season (A New York Times Notable Book of 2015) The start of a new fantasy trilogy by Hugo, Nebula & World Fantasy Award nominated author N.K. Jemisin. THIS IS THE WAY THE WORLD ENDS... FOR THE LAST TIME. A season of endings has begun. It starts with the great red rift across the heart of the world's sole continent, spewing ash that blots out the sun. It starts with death, with a murdered son and a missing daughter. It starts with betrayal, and long dormant wounds rising up to fester. This is the Stillness, a land long familiar with catastrophe, where the power of the earth is wielded as a weapon. And where there is no mercy. For more from N. K. Jemisin, check out: The Inheritance Trilogy The Hundred Thousand Kingdoms The Broken Kingdoms The Kingdom of Gods The Inheritance Trilogy (omnibus edition) Shades in Shadow: An Inheritance Triptych (e-only short fiction) The Awakened Kingdom (e-only novella) Dreamblood Duology The Killing Moon The Shadowed Sun The Broken EarthThe Fifth SeasonThe Obelisk Gate

For the longest time - since, as a fledgeling writer, I discovered and explored the concept of narration perspective - I've wanted to read something told in the second person. Thing is, I wanted to come by it naturally and that took a long time. But finally, it happened.

I mean, it's not that I don't like it. I just don't think it holds water as much as I had hoped it would. I thought it would be this transcendentally fascinating and immersive experience but, at least from what I've seen here, its novelty wears off with astounding rapidity. I very quickly came to understand the book is going to refer to me but me = Essun, who is not me, and that's it. Party pooped.

Perhaps elsewhere an author might serve up some story that pulls me into its narrative and makes me feel like I'm the character being developed and I'd be happy to see that, but the truth is, I don't think Jemisin was actually trying to make me feel like Essun.

It's worth point out, I don't want this to be seen as a criticism against Jemisin, or this book, because I loved reading both.

I get why she did it, as - I imagine - would anyone who saw it to completion. There's a clear and evident purpose by the time you reach the conclusion of the book and - while I cannot speak for others - I adored the revelations that serve the narrative devices' inclusion.

Perhaps these revelations would be obvious to others but I relish my own gullibility. I completely failed to see the first surprise coming and only predicted the second around 20 or so pages before it was revealed to be true.