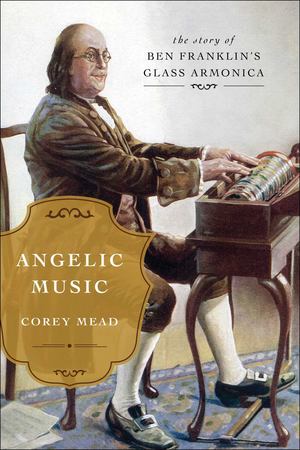 Corey Mead
A jewel of musical history—the story of Ben Franklin’s favorite invention, the glass armonica—including the composers who wrote for it (Mozart, Beethoven, Handel, among others); Dr. Mesmer who used it to hypnotize; Marie Antoinette and the women who popularized it; its decline and recent comeback. Benjamin Franklin is renowned for his landmark inventions, including bifocals, the Franklin stove, and the lightning rod. Yet his own favorite invention—the one he said gave him the “greatest personal satisfaction”—is unknown to the general public. The glass armonica, the first musical instrument invented by an American, was constructed of stacked glass bowls and played by rubbing one’s fingers on the rims. It was so popular in the late eighteenth and early nineteenth centuries that Mozart, Beethoven, Handel, and Strauss composed for it; Marie Antoinette and numerous monarchs played it; Goethe and Thomas Jefferson praised it; Dr. Franz Mesmer used it for his hypnotizing Mesmerism sessions. Franklin himself played it for George Washington and Thomas Jefferson. In Angelic Music, Corey Mead describes how Franklin’s instrument fell out of popular favor, partly due to claims that its haunting sounds could drive musicians out of their minds. Some players fell ill, complaining of nervousness, muscle spasms, and cramps. Audiences were susceptib≤ a child died during a performance in Germany. Some thought its ethereal tones summoned spirits or had magical powers. It was banned in some places. Yet in recent years, the armonica has enjoyed a revival. Composers are writing pieces for it in genres ranging from chamber music and opera to electronic and pop music. Now Mead brings this instrument back to the public eye, telling the compelling, fascinating story of its origins.