Fear and Loathing at Rolling Stone: The Essential Writing of Hunter S. Thompson 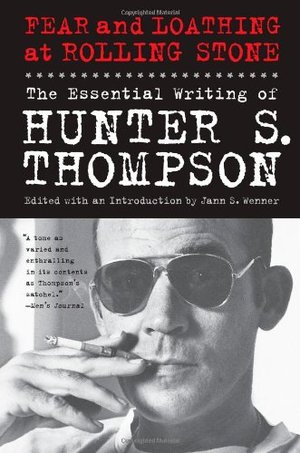 Hunter S. Thompson
“Buy the ticket, take the ride,” was a favorite slogan of Hunter S. Thompson, and it pretty much defined both his work and his life. Jann S. Wenner, the outlaw journalist’s friend and editor for nearly thirty-five years, has assembled articles—and a wealth of never- before-seen correspondence and internal memos from Hunter’s storied tenure at Rolling Stone—that begin with Thompson’s infamous run for sheriff of Aspen on the Freak Party ticket in 1970 and end with his final piece on the Bush-Kerry showdown of 2004. In between is Thompson’s remarkable coverage of the 1972 presidential campaign and plenty of attention paid to Richard Nixon; encounters with Muhammad Ali, Bill Clinton, and the Super Bowl; and a lengthy excerpt from his acknowledged masterpiece, Fear and Loathing in Las Vegas. The definitive volume of Hunter S. Thompson’s work published in the magazine, Fear and Loathing at Rolling Stone traces the evolution of a personal and professional relationship that helped redefine modern American journalism, presenting Thompson through a new prism as he pursued his lifelong obsession: The life and death of the American Dream.