Tales from the Shadowhunter Academy 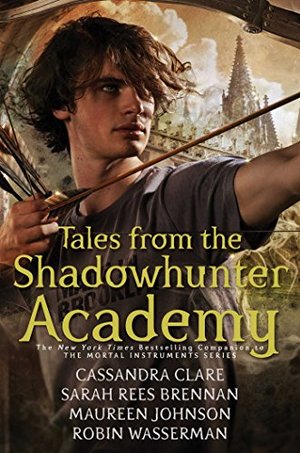 Cassandra Clare, Sarah Rees Brennan, Maureen Johnson, Robin Wasserman
The New York Times and USA TODAY bestselling collection of short stories chronicling the adventures of Simon Lewis as he trains to become a Shadowhunter is now available in print for the first time with ten brand-new comic illustrations!Simon Lewis has been a human and a vampire, and now he is becoming a Shadowhunter. The events of City of Heavenly Fire left him stripped of his memories, and Simon isn’t sure who he is anymore. So when the Shadowhunter Academy reopens, Simon throws himself into this new world of demon-hunting, determined to find himself again. Whomever this new Simon might be. But the Academy is a Shadowhunter institution, which means it has some problems. Like the fact that non-Shadowhunter students have to live in the basement. At least Simon’s trained in weaponry—even if it’s only from hours of playing D&D. Join Simon on his journey to become a Shadowhunter, and learn about the Academy’s illustrious history along the way, through guest lecturers such as Jace Herondale, Tessa Gray, and Magnus Bane. Written by Cassandra Clare, Sarah Rees Brennan, Maureen Johnson, and Robin Wasserman, these moving and hilarious short stories are perfect for the fan who just can’t get enough of the Shadowhunters.

Welcome to the Shadowhunter Academy: 4 stars

The Whitechapel Fiend: 4 stars (would have been 3 without Jace. But Jace misses Simon)

Nothing But Shadows: 5 stars (Matthew and James are in love for sure)

The Evil we Love: 3.5 stars (A little bit over Valentine's Circle drama. We've been hearing about it for seven books now)

Bitter of Tongue: 4.5 stars (Holy... poor Mark Blackthorn. He's abandoned by the people he thought were his family, but still has the goodness in him to help save Simon and Isabelle when the shadowhunters have wronged him and his mind is kind of slipping away.)

The Fiery Trial: 3.75 star (I don't necessarily see the importance of the what the Laky Lyn hallucination?)

Born to Endless Night: 5 stars (RAPHAEL!! He was mentioned so many times and he's gone but people still clearly cared about him. Maybe now he can spend time being sardonic with Ragnor. Also, Simon's interactions with Jace and Alec gave me life)

Angels Twice Descending: 3 stars (ending was the most predictable thing ever and we didn't need the 30 pages of Simon trying to convince himself that becoming a shadowhunter is what he wanted. Obviously he's going to drink from the cup.)