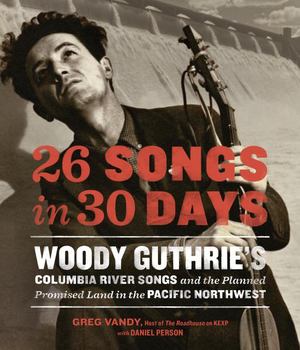 Greg Vandy, Daniel Person
In 1941, Woody Guthrie wrote 26 songs in 30 days--including classics like "Roll On Columbia" and "Pastures of Plenty"--when he was hired by the Bonneville Power Administration to promote the benefits of cheap hydroelectric power, irrigation, and the Grand Coulee Dam. Timed to celebrate the 75th anniversary of this project, KEXP DJ Greg Vandy takes readers inside the unusual partnership between one of America's great folk artists and the federal government, and shows how the American folk revival was a response to hard times. 26 Songs In 30 Days plunges deeply into the historical context of the time and the progressive politics that embraced Social Democracy during an era in which the United States had been severely suffering from The Great Depression. And though this is a musical history of a vibrant American musical icon and a specific part of the country, it couldn't be a better reminder of how timeless and expansive such topics are in today's political discourse.