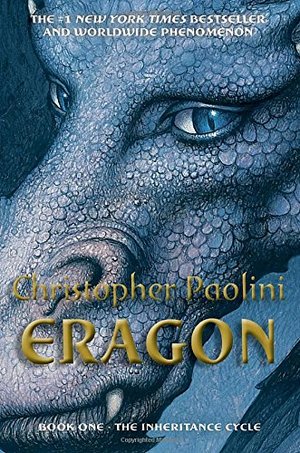 Christopher Paolini
Now in paperback! Fifteen-year-old Eragon believes that he is merely a poor farm boy—until his destiny as a Dragon Rider is revealed. Gifted with only an ancient sword, a loyal dragon, and sage advice from an old storyteller, Eragon is soon swept into a dangerous tapestry of magic, glory, and power. Now his choices could save—or destroy—the Empire.A New York Times BestsellerA USA Today BestsellerA Wall Street Journal BestsellerA Book Sense Bestseller

@karenmahtin
Reviewed: 2022-01-22
I really liked these books, and then I watched The Lord of the Rings (series) and got pretty mad at how much was borrowed from it in the writing of these books. Still a great accomplishment for such a young writer.
@visas
Reviewed: 2021-06-01
I have to say that the despite all the dislikes this book is getting, I still enjoy this nook very much. The plot was quite simple, yes but the way Paolini put everything together was really intriguing for me. I absolutely adore this book. While yes, there might be some similarities between this book and Lord of the Rings, it is still very enjoyable. :)
@torykohrin
Reviewed: 2021-05-22
My journey with Eragon started years ago... and yet, I do not think it has left me since then.

I found out, relatively recently, I have a keen memory for plots, for books and films and serials. I always blamed it on the rest of my family being so forgetful but reciting, anticipating and remembering names from something I have seen when I was practically a different person? Needing only a few words to jostle my memory even if I read more than 300 books in the past year?

Returning to Aleagazia was a daunting prospect. Eragon seemed a part of what might have been my second "childhood" - the time when I discovered the magic inside the paper pages of a book. And, inevitably, my mind was a desert under a fierce storm, absorbing everything indiscriminately, being parched for any words that were not outright terrible. (it was a little sad revelation just how much, when I tried to read a book I remembered most fondly and found it... so lacking)

So you might imagine my apprehension... and joy when I beheld Eragon... and found it to be as great a book (90% as great
@nickscully
Reviewed: 2020-06-29
I really loved this book, but the sequel seemed to be slower. Maybe that's why I haven't read the last two in the series. I'll re-read them soon enough.
@lostarchive
Reviewed: 2020-01-19

(No Major Spoilers, And Yes It's Far Better Than The Movie)

Eragon is a tried and true fantasy novel to its core: A heros journey, a coming of age, master-apprentice tensions, power struggles, and yes most importantly dragons and magic. Same old, same old right? What makes Eragon unique is the twists Paolini adds, all of which are welcome if you're a fan of the genre. Everything has personality, especially the staring lady Saphira (Suh-fear-uh) who adorns the cover. There are few completely mindless creatures. The typical baddies are replaced with familiar yet unique counterparts, no orcs here folks. Magic is treated more so as a tool than a way to immediately solve every problem the protagonist faces. Here the use of magic comes with a price which gives it more impact when it is used. This element is especially refreshing for those tired of the typical deus ex machina sort of magic used to make up for bad writing. I would only classify one or two moments in Eragon qualifying as Deus Ex, where as some series are littered with it.

Some critiques harshly accuse Paolini of ripping off Star Wars and Lord of the Rings. Firstly I wonder if they have ever seen a Star Wars film as any comparison is slim at best. They also likely haven't read the myriad of Sci-Fi and Fantasy novels that inspired George Lucas, very little of the franchise is original. Secondly as far as Lord of the Rings goes of course it inspired the Inheritance Cycle, just as it has inspired most of Modern Fantasy.

This is hardly a detriment as Eragon is far more accessible to younger audiences in terms of readability. For some it may seem daunting at ~157,000 words according to the author. Even so I find that it is appropriate for children and adults alike where as other staples such as The Lord of The Rings may be a bit too advanced for younger individuals. Chapters are laid out in a way that will please those who read in short bursts as well as those that prefer longer sessions. At no point do you feel that things are over written and boorish nor do you feel they are so short and rushed that it becomes too shallow for immersion.

Paolini wrote Eragon in his late teens and it was his first novel, and in fairness to an extent it does show. However to disregard it for that fact alone would be a big mistake. It may not be the apex of Fantasy but it is a great read and very approachable, especially given the writers age and experience at the time. Far too many fantasy novels end up being too daunting or too simple, few are "just right" in the way Eragon is. Though, as with all books that appeal to both children and adults it doesn't quite go the extra mile in either direction and it lacks the true originality that would of earned it five stars . I am critical about the books I keep and Eragon has earned its place on my bookshelf most definitely. I would recommend this over other well known fantasy series like Harry Potter any day and if you are looking for a more digestible fantasy series of the Tolkein variety, this is it.