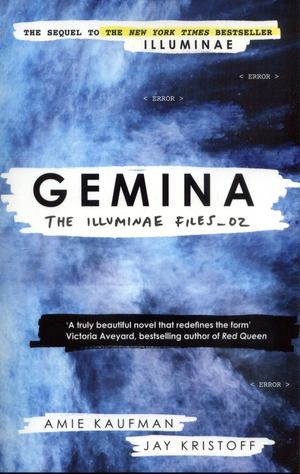 Amie Kaufman, Jay Kristoff
Hanna Donnelly is the station captain's pampered daughter and Nik Malikov is the reluctant member of a notorious crime family. Together they struggle with the realities of life aboard the galaxy's most boring space station, blissfully unaware that Kady Grant and the Hypatia are headed right toward Heimdall with news of the Kerenza invasion.

So, this book basically took the recipe of the first one and remixed it. As such it was kinda predictable and kinda dragged at times. By the end and that last graphic report about them all dying, I was hoping that the end truly was bleak and we'd return back to Kady as the protagonist for the last book. Not that Hanna was a bad main character, just that their stories were too much alike, and for a continuation, I feel, too few of the characters from the first book show up in any meaningful roles. Man I hope the third book does better on that aspect, but from what I remember of the summary, my hopes are not high. Still, parts of it were highly entertaining eg. that pop song virus, and the aded visual elements of the journal were pretty dope. It's just that as the book went on I started losing interest in seeing how it all ended. Also, the title. Honestly, I spent the better part of the book believing that it was called Gemina because of the similarities to the first book. If that was the plan - nice idea, but the execution fell short. The relevance of the title as such was unexpected, but also done pretty poorly. I know that it was done to build suspense and add a twist and sense of urgency, but it came way too late into the story and instead just felt really rushed and manufactured.