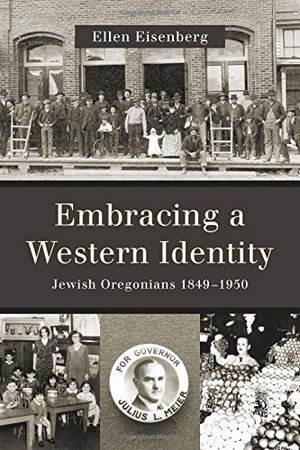 Ellen Eisenberg
Not all of Oregon’s pioneers were Christian farmers or bachelor prospectors. Indeed, many of the first brick buildings on Oregon’s newly platted Main Streets were built by Jewish merchants whose services were essential to town founding and growth. In Embracing a Western Identity, Ellen Eisenberg places Jewish history in the larger context of western narratives, challenging the traditional view that the “authentic” North American Jewish experience stems from New York. The westward paths of Jewish Oregonians and their experiences of place shaped the communities, institutions, and identities they created, distinguishing them from other American Jewish communities. Eisenberg traces the Oregon Jewish experience from its pioneer beginnings in the mid-nineteenth century to the highly concentrated Portland communities of the mid-twentieth century. Drawing on extensive archival resources at the Oregon Jewish Museum, this historical commentary explores patterns of migration and settlement, the place of Jews in the state’s ethnic landscape, their engagement in politics, the development of institutions, and their relationship to Zionism. Departing from familiar treatments of the Jewish experience, Embracing a Western Identity provides a critical look at the impact of place and opportunity upon the identities of migrants both as Oregonians and as American Jews. Readers and scholars interested in western history—religious, ethnic, expansionist, and otherwise—will enjoy Eisenberg’s accessible writing style and rich photograph collection.