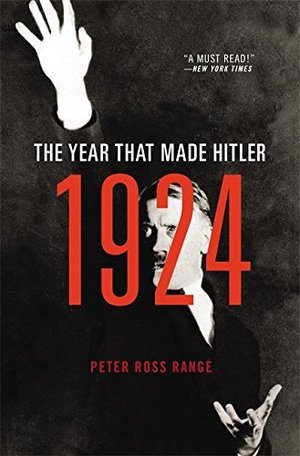 Peter Ross Range
The dark story of Adolf Hitler's life in 1924--the year that made a monster. Before Adolf Hitler's rise to power in Germany, there was 1924. This was the year of Hitler's final transformation into the self-proclaimed savior and infallible leader who would interpret and distort Germany's historical traditions to support his vision for the Third Reich. Everything that would come--the rallies and riots, the single-minded deployment of a catastrophically evil idea--all of it crystallized in one defining year. 1924 was the year that Hitler spent locked away from society, in prison and surrounded by co-conspirators of the failed Beer Hall Putsch. It was a year of deep reading and intensive writing, a year of courtroom speeches and a treason trial, a year of slowly walking gravel paths and spouting ideology while working feverishly on the book that became his manifesto: Mein Kampf. Until now, no one has fully examined this single and pivotal period of Hitler's life. In 1924, Peter Ross Range richly depicts the stories and scenes of a year vital to understanding the man and the brutality he wrought in a war that changed the world forever.