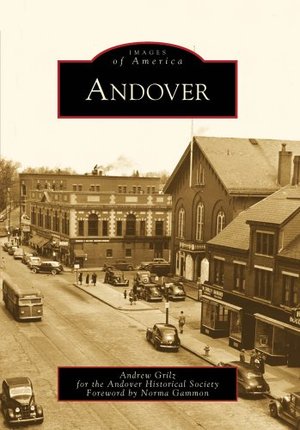 Andrew Grilz, Andover Historical Society, Foreword by Norma Gammon
Andover, geographically one of the largest townships in the Commonwealth of Massachusetts, has a long and illustrious history. Founded more than 350 years ago, Andover has played a part in several critical events in American history, including the French and Indian wars, the witchcraft hysteria of the 1690s, the American Revolution, the abolitionist movement, the Civil War, and the Industrial Revolution. It is the birthplace of the song “America,” written by Samuel Francis Smith. It has been the home of such notables as Anne Bradstreet, the first poet in the New World; Salem Poor, former slave and hero of the Battle of Bunker Hill; Samuel Osgood, the first postmaster general of the United States; and Harriet Beecher Stowe, author of Uncle Tom’s Cabin. It is home to the Andover Village Improvement Society, the second-oldest land conservation group in America. Pres. Franklin Pierce called Andover his summer home, and countless leaders of business and government resided in Andover while students at Phillips Andover Academy, one of the most prestigious private academies in the country.