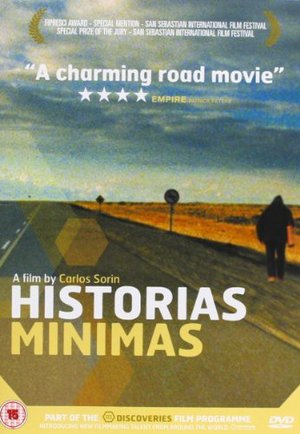 Carlos Sorin
United Kingdom released, PAL/Region 2 DVD: it WILL NOT play on standard US DVD player. You need multi-region PAL/NTSC DVD player to view it in USA/Canada: LANGUAGES: Spanish ( Dolby Digital 2.0 ), English ( Subtitles ), SPECIAL FEATURES: Biographies, Interactive Menu, Photo Gallery, Scene Access, Trailer(s), SYNOPSIS: Three people travel from their small home town into the outside world in search of answers and adventure in this bittersweet comedy drama. Don Justo (Antonio Benedictis) used to run a market in a small community in Southern Argentina, but failing eyesight and the loss of his driver's license has led him to retire. However, when he learns that the dog he lost several years ago was seen in San Julian, the closest significantly larger city, Don Justo sets out to find his dog, determined to travel to San Julian on foot if no other transportation is available. Roberto is a traveling salesman who is infatuated with a woman whose husband, one of his clients, has recently passed on. Hoping to win her heart, Roberto decided to bring a birthday cake to her child's birthday party in San Julian; however, his search for the ideal cake is complicated when he realizes he isn't sure if the child is a boy or a girl. Maria (Javiera Bravo) is a wife and mother who has been struggling to hold her family together after her husband lost his job. Maria is invited to appear on a television game show, and hopes to win the grand prize of a new food processor, but while lady luck at first smiles on her, fate has slightly different plans. Historias Minimas received its American premiere at the 2003 Sundance Film Festival. SCREENED/AWARDED AT: Goya Awards, San Sebastian International Film Festival, Sundance Film Festival, ...Intimate Stories ( Historias mínimas ) ( Minimal Stories )