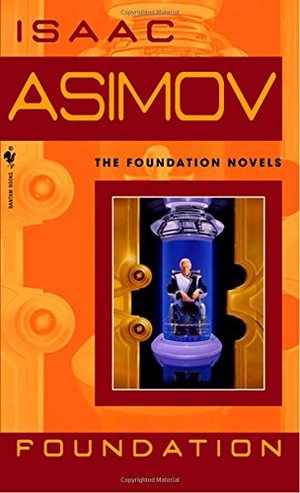 Isaac Asimov
For twelve thousand years the Galactic Empire has ruled supreme. Now it is dying. But only Hari Sheldon, creator of the revolutionary science of psychohistory, can see into the future--to a dark age of ignorance, barbarism, and warfare that will last thirty thousand years. To preserve knowledge and save mankind, Seldon gathers the best minds in the Empire--both scientists and scholars--and brings them to a bleak planet at the edge of the Galaxy to serve as a beacon of hope for a fututre generations. He calls his sanctuary the Foundation.But soon the fledgling Foundation finds itself at the mercy of corrupt warlords rising in the wake of the receding Empire. Mankind's last best hope is faced with an agonizing choice: submit to the barbarians and be overrun--or fight them and be destroyed.

One can see the atomic bomb looming largely over this novel - almost like a mushroom cloud, but that's no excuse for the lack of world building or even tension in this book. I don't understand how this series is SO beloved, especially by younger people who have so much excellent sci-fi to pick from. Nonetheless, it's an important book for the genre, so now I've read it.

It's not horrid, and it's terrifically interesting in the way it draws the reader in, but after a while, it just stays on a very low simmer for the rest of the book. Actually short stories, perhaps that's the problem. They are linked, but they go nowhere. There is no cliffhanger here - which is why I added a star. I hate a book that ends with a cliffhanger.