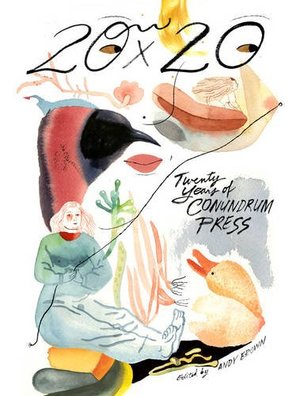 Conundrum Press was created in 1996 in post-referendum Montreal by Andy Brown, to give voice to the under-represented working in the underground anglo cultural milieu. Writers and cartoonists came to him wanting to make chapbooks. Soon he started making genre-defying books with spines, not staples. After fifteen years he moved to Nova Scotia and focused exclusively on graphic novels. Now, twenty years later, this anthology represents all that history, all that talent, all that goodness. To celebrate twenty years in operation he asked one author or artist for each year of the press who had a book out that year to contribute something new, something that represented Conundrum. For some it would have been the first book he or she had ever made. So in the end twenty Conundrumites represent twenty years, hence 20x20. There will be digging deep into the archives, there will be memoirs, there will be comics, drawings, and photographs. There will be laughter and tears of joy.