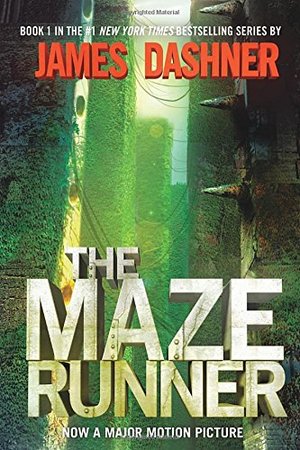 James Dashner
Read the first book in the New York Times bestselling Maze Runner series, perfect for fans of The Hunger Games and Divergent. The Maze Runner motion picture featuring the star of MTV's Teen Wolf, Dylan O’Brien; Kaya Scodelario; Thomas Brodie-Sangster; Will Poulter; and Aml Ameen, and hits theaters September 19, 2014! Also look for James Dashner’s newest book The Eye of Minds, book one in the Mortality Doctrine series.   If you ain’t scared, you ain’t human.   When Thomas wakes up in the lift, the only thing he can remember is his name. He’s surrounded by strangers—boys whose memories are also gone.   Nice to meet ya, shank. Welcome to the Glade.   Outside the towering stone walls that surround the Glade is a limitless, ever-changing maze. It’s the only way out—and no one’s ever made it through alive.   Everything is going to change.   Then a girl arrives. The first girl ever. And the message she delivers is terrifying.   Remember. Survive. Run. Praise for the Maze Runner series:   "[A] mysterious survival saga that passionate fans describe as a fusion of Lord of the Flies, The Hunger Games, and Lost."—EW.com   “Wonderful action writing—fast-paced…but smart and well observed.”—Newsday “[A] nail-biting must-read.”—Seventeen.com“Breathless, cinematic action.”—Publishers Weekly   “Heart-pounding to the very last moment.”—Kirkus Reviews   “Exclamation-worthy.”—Romantic Times   [STAR] “James Dashner’s illuminating prequel [The Kill Order] will thrill fans of this Maze Runner [series] and prove just as exciting for readers new to the series.”—Shelf Awareness, Starred   “Take a deep breath before you start any James Dashner book.”—Deseret NewsFrom the Hardcover edition.

The Maze Runner is a great book and it is a really action packed book. It is also a really good movie to. The book is about a teenager ,Thomas, that gets sent to The Maze ,which is a prison baseacly, and he has to survive in the middle of the maze. Well he decided to go in the maze when it was turninig night. The Maze has these things called Greavirs which are bad. In the middle of the story the Greavirs get in the middle of the maze where all of the people are and most of the people die. SSso Thomas and the other runners have to find clues to get out of the maze. And once they get all of the clues, they can excape the maze and thats when the Scorch Chriles begins

Feel like I don't have much to say because not much happened.  Takes place over about two weeks at the end of the life of the Maze, when things are getting weird.  All the characters are smart kids whose primary emotions are frustrated and determined -- except one kid is also angry.

I don't really feel the need to read the whole trilogy, except that I'm a little curious to find out who would build this huge complex, including the maze, to put childrent through it like lab rats.

I would have liked this more if it had been told from the beginning of the maze, to see them meeting the challenges as they were new, figuring it all out.  I also feel like Ender's Game did the whole testing children thing much better, and accomplished it in one (albeit longer) book.