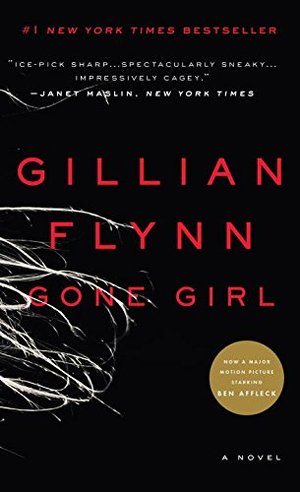 Gillian Flynn
On a warm summer morning in North Carthage, Missouri, it is Nick and Amy Dunne’s fifth wedding anniversary. Presents are being wrapped and reservations are being made when Nick’s clever and beautiful wife disappears. Husband-of-the-Year Nick isn’t doing himself any favors with cringe-worthy daydreams about the slope and shape of his wife’s head, but passages from Amy's diary reveal the alpha-girl perfectionist could have put anyone dangerously on edge. Under mounting pressure from the police and the media—as well as Amy’s fiercely doting parents—the town golden boy parades an endless series of lies, deceits, and inappropriate behavior. Nick is oddly evasive, and he’s definitely bitter—but is he really a killer?

Not big on myster or thriller books, especiallynot modern ones, I really enjoyed this. This is one of the only books that I recomend watching the movie THEN reading the book, in that order.

@scaredofspiders
Reviewed: 2018-12-26
Sooooo... ... that was petty fucked up. It was as if the author watched the movie, The War of the Roses, and thought to herself, "That was fun, but I bet I can make it so so extra. I bet I can make people actually cringe and sometimes feel a little sick to their stomachs, while reading." If this was her goal, she definitely succeeded
The book has a dual narratorship. We switch between Nick and Amy. This book is the story of their fifth anniversary and its fallout. Initially, I could barely read the Amy parts because I, apparently, cannot stand reading about bitchy, airheaded socialites. If there is a specific reason this book took me nearly 3 months to read, other than school, we can blame it on this little nugget.
These people are sometimes sympathetic or likeable but it never lasts. They're horrible human beings. In the end the book is akin to an episode of Jerry Springer: you stare, gasp at the depths and lengths of the degradation of mankind, shake your head at the predictable parts, and ultimately get to pat yourself on the back because "... hey. I may not be perfect or sometimes even in the realm of right but at least I'm not these fucking miserable bags of human effluent."
@necrobane84
Reviewed: 2018-06-03
Fucked up, but good.
@spirit0
Reviewed: 2017-01-29
All the praise heaped upon this book is warranted. After reading only the first segment, a mere three paragraphs, I was hooked. The prose shook me, gave me goosebumps in the first 100-200 pages. The rest of the book is more focused on the "OMG HOW DID, WHO DID, HOW, WHAT'S GOING TO HAPPEN??" writing rather than "touch-you-to-your-core" writing. Which is okay because Gillian Flynn has a crazy imagination.

I have to say some gender issues are my biggest concern and critique of this book. Also, the lack of technology feels unreal, since it is set in 2005-2012. But overall it's amazing. It asks so many questions about identity—how is it formed? how does the media influence it? do we change over time? is there a "real" self?—that it hurts and make you wonder who you really are.
@crazmiss
Reviewed: 2016-12-02

The ending of this book wasnt the best but the rest was great ! In the begining i thought i new what happend but i didnt i got surprised!