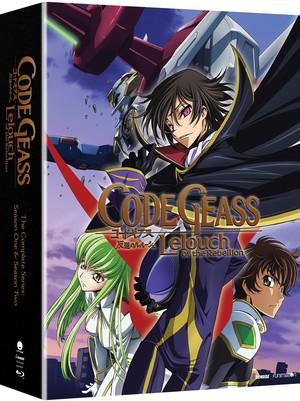 Kevin Seymour
In the year 2017 of the Imperial Calendar, parts of the world are under the control of the Holy Britannian Empire. Japan is now known as Area 11, the proud people treated as lower class citizens. Lelouch Lamperouge was once a Britannian prince but when his mother was assassinated, he was sent to Japan and thought to be killed. But he survived. After getting caught up in a terrorist attack, he encounters a strange girl known as C.C., who grants him the power of Geass and the ability to command others. With his newfound powers, Lelouch becomes Zero, a rebel leader for justice, and forms his own anti-government group. His goals are simple: get answers about his mother’s murder and make a world that is worthy of his beloved little sister, Nunnally. Even with his Geass, Lelouch will encounter countless challenges. But nothing can prepare him to face his former best friend, Suzaku Kururugi, a Japanese citizen…and soldier of Britannia? The power of Geass: is it a blessing…or a curse? The Collector's Edition comes in a collectible chipboard box, contains both seasons of the series on Blu-ray, a set of 16 artcards featuring artwork from CLAMP with a special pearlescent finish.