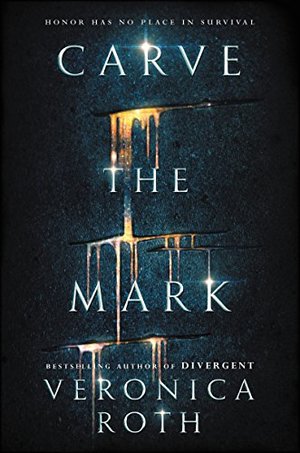 Veronica Roth
In a galaxy powered by the current, everyone has a gift. Cyra is the sister of the brutal tyrant who rules the Shotet people. Cyra’s currentgift gives her pain and power—something her brother exploits, using her to torture his enemies. But Cyra is much more than just a blade in her brother’s hand: she is resilient, quick on her feet, and smarter than he knows. Akos is the son of a farmer and an oracle from the frozen nation-planet of Thuvhe. Protected by his unusual currentgift, Akos is generous in spirit, and his loyalty to his family is limitless. Once Akos and his brother are captured by enemy Shotet soldiers, Akos is desperate to get his brother out alive—no matter what the cost. Then Akos is thrust into Cyra's world, and the enmity between their countries and families seems insurmountable. Will they help each other to survive, or will they destroy one another?

The enemies-turned-lovers story is compelling, sure sure sure, but it's hard to stomach this story in today's political climate. With the ideas being that oh, if only captives were nice to oppressors, then they can be turned. The simultaneously oppressed and oppressing is a dark-skinned, semi-backward peoples. Come on, Roth, you can do better than that. Defeating your enemies with kindness only works when they know they're wrong, and therefore do not want to be evil. This is generally now how it works.

Enough twists and turns in there to keep you gripped throughout. They all have stupid names. I'm glad it is addressed that Eijah and Ryzek (spelling, idk, I listened to the audiobook for most of this) sort of become each other, though I am annoyed that characters who are not them don't seem to get it. (They will acknowledge that Eijah is becoming a different person by trading memories with Ryzek, but don't acknowledge how Ryzek taking those memories means he should also change, too, and at least theoretically be kinder. Doesn't really make sense.)

Anyway. It's Veronica Roth exploring the things that plague Veronica Roth, clearly as a young religious white person: How does segregation work (a la factions in Divergent) and how do people fall in love in grueling circumstances?