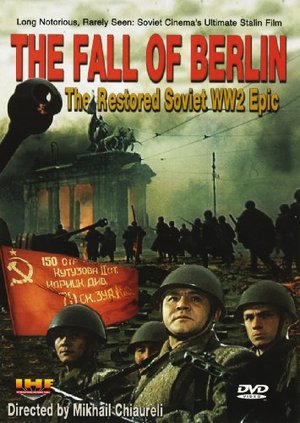 Mikhail Chiaureli
"The Fall of Berlin:The Restored Soviet Epic", directed by Mikhail Chiaureli is now available on DVD. Long Notorious, Rarely seen: Soviet cinema's definitive Stalinist recreation of World War 2 also serves as the crowning moment in Stalin's postwar deification. Stalin himself worked on the screenplay for this blockbuster epic, fine-tuning its portrayal of the dictator as father-hero to his people. No expense was spared in production: 5 artillery and infantry divisions, 4 tank battalions, 193 planes, and 45 German trophy Panzers, as well as 1.5 million liters of fuel, were used in staging its panoramic battle scenes. The film's remarkable recreations of the battle for Berlin, climaxing in the bitter struggle over the Reichstag, impressed even the film's Western critics with their gritty realism and sheer spectacle. Equally memorable is the film's depiction of Hitler and his inner circle, whose folly and intrigues play out on sets that recreate the grandiosity of the Fueher's Chancellory and the claustrophobia of his bunker with surrealistic intensity. Reflecting the emerging antagonisms of the Cold War, the film also serves up a caustic polemic against Stalin's British and American wartime allies, depicting FDR and (especially) Churchill as closeted Nazi sympathizers, capable of any treachery against the Soviet state. Wildly ambitious in its geopolitical sweep, The Fall of Berlin also manages to throw in a romantic subplot involving a leaden Stakhanovite, while settling any number of domestic political scores - General Georgy Zhukov, for example, appears as a gullible fool, saved from his errors only by Stalin's timely intervention. Indeed, Stalin's timely interventions provide this film its organizing principle, and it is he who pulls together all the threads of its wildly spinning narrative. Whether directing the Red Army to brilliant victory or anticipating Churchill's treachery or providing sage advice to lovelorn Stakhanovites, he remains unflappable, avuncular, uncannily prescient and wise. Stalin is always with us, one character proclaims to his comrades on the battlefront; the propagandistic function of this film is to make us feel this god-like presence in every scene. Presented to Stalin as a gift on his seventieth birthday, viewed by some 38 million Soviet filmgoers upon its initial release, winner of every conceivable Soviet prize, The Fall of Berlin was abruptly pulled from circulation during the "de-Stalinization" campaigns that began after Stalin's death in 1953. Having recently gained rights to the original negative, International Historic Films offers this long-suppressed epic in a digitally-restored version, with historical commentaries and supplements. Note: Vividly filmed in Agfacolor film stock removed from Germany by the Red Army, The Fall of Berlin features a film score by Dmitri Shostakovich. DVD FEATURES: Photo Gallery with Accompanying Scholarly Audio Commentary Switchable English Subtitles Digitally Restored and Re-Mastered Region 0: Compatible with All DVD Players Worldwide. USSR, 1949, Color, (Part 1: 74 minutes, Part 2: 77 minutes) Total Running Time: 151 minutes, Russian Dialogue with English subtitles.