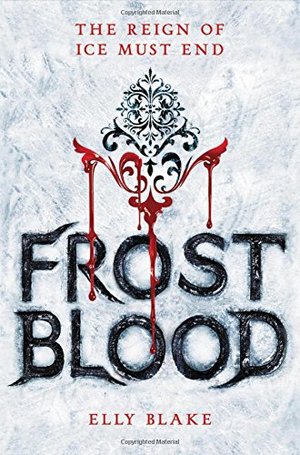 Elly Blake
The Frost King will burn.Seventeen-year-old Ruby is a Fireblood who has concealed her powers of heat and flame from the cruel Frostblood ruling class her entire life. But when her mother is killed trying to protect her, and rebel Frostbloods demand her help to overthrow their bloodthirsty king, she agrees to come out of hiding, desperate to have her revenge.Despite her unpredictable abilities, Ruby trains with the rebels and the infuriating--yet irresistible--Arcus, who seems to think of her as nothing more than a weapon. But before they can take action, Ruby is captured and forced to compete in the king's tournaments that pit Fireblood prisoners against Frostblood champions. Now she has only one chance to destroy the maniacal ruler who has taken everything from her--and from the icy young man she has come to love.Vivid and compelling, Frostblood is the first in an exhilarating series about a world where flame and ice are mortal enemies...but together create a power that could change everything.

@ruthsic
Reviewed: 2018-01-25
Frostblood, at first, seemed to me like it would be some sort of Red Queen-Hunger Games crossover, and I admit, with the two races it does seem so. But Blake has created an intricate mythology in a fantasy world about two kinds of races created by two different wind gods. The Frostbloods can manipulate ice and the Firebloods, fire, and they are equal in power - but for centuries now the kingdom has been ruled by Frostbloods and the Firebloods have been killed off in mass genocides. Ruby is a hidden Fireblood, who get caught up in a plot to assassinate the current Frostblood king. Saved from the prisons and cloistered away in an abbey, she is being trained to enhance her fire powers so that she can face the power of the King. But she also starts to fall in love with the closed off Frostblood warrior, who seems to hate her at first but slowly warms up to her.

The tone of the book is quite different in its two parts - the first is faster in pace, and has magic and romance dominating the story, while the second is slower, and goes into the mythology and characterization. Ruby, the daughter of a healer, can't take the mindless violence of the arena, and the kill or be killed situation is torment for her. But more importantly, something dark is rising to threaten the whole kingdom, and she has to be strong enough to fight it. As a character, she is tempestuous, passionate and reckless, much like the fire in her veins, and it is more that she is carried along with the plot rather than directing it.