Getting the Most out of Your Mentoring Relationships 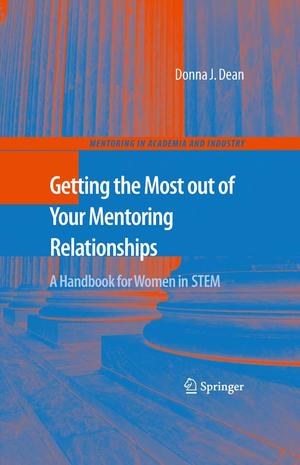 Donna J. Dean
Mentorship practice has been part of the human experience since the Golden Age of Greece. Engaging with a mentor as a way to learn and achieve one’s full potential is an ancient and respected practice. And, it has been the keystone on which the Association for Women in Science (AWIS) has built its program over the past three decades. Trailblazers, such as Dr. Estelle Ramey and Dr. Anne Briscoe, experienced first-hand the isolation of women in the country’s male-dominated scientific establishment and worked to build an organization that would promote women through mentoring relationships. Dr. Ramey, who earned her degree in p- siology and biophysics and taught at Georgetown Medical School, was a we- known feminist speaker and writer. Noted for her great wit, she once quipped, ‘‘I was startled to learn that ovarian hormones are toxic to brain cells. ’’ Throughout her career, Dr. Ramey decried sexist comments and situations that treated women as less than fully human. She felt very strongly about how little, if anything, it took to extend a helping hand to someone else in a way that could really make a huge difference in her life. As she wrote in her book called Letters to our Grandchildren, ‘‘If I could leave you with any advice, it would be to speak words of caring not only to those closest to you, but to all the hungry ears you encounter on your journey through a cold world.