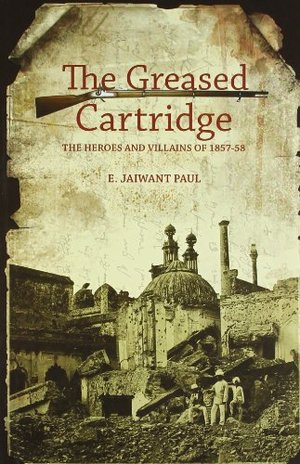 E. Jaiwant Paul
In most accounts of the revolt, the greased cartridge has been referred to as the spark and tinder that lit the flames of rebellion. …The greased cartridge—what was it all about? The army so far had been quipped with the smooth-barrelled musket, which had a protracted loading procedure and was not accurate over long ranges. The new Enfield rifles, which were now being issued, had grooved or rifled barrels. This made them more accurate and gave them a longer range. The powder and bullet for the new rifle were put together in a paper cartridge. To load the rifle, the end of the cartridge containing the powder had to be bitten off so that the charge would ignite. The cartridge was then rammed down the muzzle of the rifle…. The grease used was tallow, probably containing both cow and pig fat. To “the cow reverencing Hindu and the pig paranoid Muslims” having to bite this was repellent, defiling and deadly to their religious prospects.’ The Revolt of 1857-58 was the biggest and bloodiest conflict against any European colonial power during the nineteenth century. This book is essentially about the heroes—Tatya Tope, Nana Saheb, Rani Lakshmi Bai, Kunwar Singh of Jagdishpur—and not to forget, a few villains. Though the revolt failed in its objective, even in failure it served a grand purpose. It was a source of inspiration for the national liberation movement, which later achieved what the revolt could not.