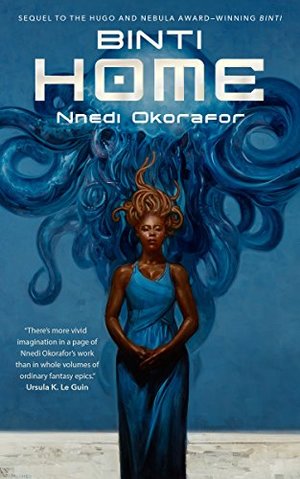 Nnedi Okorafor
The thrilling sequel to the Hugo and Nebula-winning Binti by Nnedi Okorafor It’s been a year since Binti and Okwu enrolled at Oomza University. A year since Binti was declared a hero for uniting two warring planets. A year since she found friendship in the unlikeliest of places.And now she must return home to her people, with her friend Okwu by her side, to face her family and face her elders.But Okwu will be the first of his race to set foot on Earth in over a hundred years, and the first ever to come in peace.After generations of conflict can human and Meduse ever learn to truly live in harmony?Praise for Nnedi Okorafor:"Binti is a supreme read about a sexy, edgy Afropolitan in space! It's a wondrous combination of extra-terrestrial adventure and age-old African diplomacy. Unforgettable!" - Wanuri Kahiu, award winning Kenyan film director of Pumzi and From a Whisper"A perfect dove-tailing of tribal and futuristic, of sentient space ships and ancient cultural traditions, Binti was a beautiful story to read.” – Little Red Reviewer“Binti is a wonderful and memorable coming of age story which, to paraphrase Lord of the Rings, shows that one girl can change the course of the galaxy.” – Geek Syndicate“Binti packs a punch because it is such a rich, complex tale of identity, both personal and cultural… and like all of Nnedi Okorafor’s works, this one is also highly, highly recommended.” – Kirkus Reviews"There's more vivid imagination in a page of Nnedi Okorafor's work than in whole volumes of ordinary fantasy epics." -Ursula Le Guin"Okorafor's impressive inventiveness never flags." - Gary K. Wolfe on Lagoon

@virago
Reviewed: 2021-10-12
Wow! The author describes this in such an amazing way. I can truly visualize what is happening in the story. It's a year after the first story, Binti and her Meduse counterpart, Okwu are studying at the university. She is suffering from PTSD, and the changes that overtook her body after her initial encounter with the Meduse. She decides to return home to complete her pilgrimage which is a tradition for the women of her people. Okwu goes to earth with her. Her family welcomes her home, but later berates her for leaving home and insist that her leaving is the cause of her father's deteriorating health. Later she sees a vision of the Night Masquerade, which only men are supposed to be able to see. The "Desert People" come for her. Everyone sees them as 'savages', including the Himba, which man they have nerve considering the Khoush (the other human race on earth) sees them as 'savages', but I digress. It turns out that Binti, through her father, is a relation to the "Desert People", the Enyi Zinariya, and they are not savages at all but quite advanced and have been since before the rest of the planet had even begun to communicate outside of earth. Now she is of three people, Himba, Meduse, and Enyi Zinariya and she's even more confused than every before. But now there is also a war coming. The story continues to fascinate me. I'm looking forward to the next book.
@bikram
Reviewed: 2018-06-02

There's not much of a story here. Or nothing that I liked. At this point, I'm continuing to see where this is headed.