Demon-Haunted World: Science as a Candle in the Dark, The 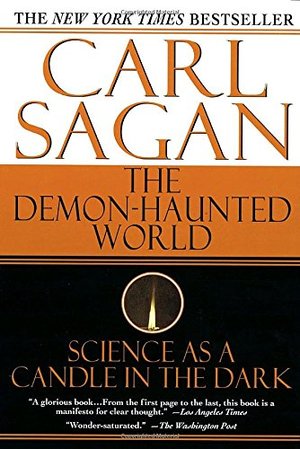 Carl Sagan, Ann Druyan
"A glorious book . . . A spirited defense of science . . . From the first page to the last, this book is a manifesto for clear thought." *Los Angeles Times"POWERFUL . . . A stirring defense of informed rationality. . . Rich in surprising information and beautiful writing." *The Washington Post Book WorldHow can we make intelligent decisions about our increasingly technology-driven lives if we don't understand the difference between the myths of pseudoscience and the testable hypotheses of science? Pulitzer Prize-winning author and distinguished astronomer Carl Sagan argues that scientific thinking is critical not only to the pursuit of truth but to the very well-being of our democratic institutions.Casting a wide net through history and culture, Sagan examines and authoritatively debunks such celebrated fallacies of the past as witchcraft, faith healing, demons, and UFOs. And yet, disturbingly, in today's so-called information age, pseudoscience is burgeoning with stories of alien abduction, channeling past lives, and communal hallucinations commanding growing attention and respect. As Sagan demonstrates with lucid eloquence, the siren song of unreason is not just a cultural wrong turn but a dangerous plunge into darkness that threatens our most basic freedoms."COMPELLING." *USA Today"A clear vision of what good science means and why it makes a difference. . . . A testimonial to the power of science and a warning of the dangers of unrestrained credulity." *The Sciences"PASSIONATE." *San Francisco Examiner-Chronicle

@madhamster
Reviewed: 2021-06-09
This rallying cry on the importance of science and critical thinking may, alas, only be known and read by the converted.
Those with an interest in science will probably already know of Sagan. His name alone made this title appeal to me. On a shelf – be it library or bookshelf – it might leap out at the browser. However, its brilliance will, more likely than not, be missed by those who should read it the most: educators and politicians.
Coincidentally, on the day I finished the book, I heard a news report that scientific education is increasingly important.
Published the year of Sagan’s death, this is worthy of standing as his last word.
Sagan argues persuasively for the importance of teaching science, and the critical thinking – or baloney detecting – that scientific-thinking requires. When pseudoscience proliferates in popular culture – when more money is spent on alternative therapy research than main-stream medical research, for example – it is difficult for those without a sceptical mind / training, to distinguish it from true science.
Why is science so maligned? Ignored? Why don’t scientists share the joys and wonderment – the journeys they take to their discoveries?
I am one of the converted. I find wonderment, joy, and reassurance in the discoveries of science. How much more joyful can a thing be to discover that the very molecules of our beings are made of the same stuff as stars – that the building blocks of everything around us, and inside us – are made of particles ejected in the big bang – from the very beginnings of time. I can also reconcile this joy with a belief in a Creator – but not necessarily a God, from any religion.
I watch pseudoscience programmes regularly – and science ones, when they’re on – and scoff and make comments. And argue with my TV (it doesn’t reply, nor do the commentators on it, which is reassuring). My current 'favourite' is Ancient Aliens which, if Sagan was still alive, I’m sure he’d be taking issue with. It is the heights of ridiculousness. And, it is a true example of Sagan’s contentions – it is made and screened on the History Channel. (Check out this article ‘Where’s the History on History?' - I know it’s not science, which is what Sagan is talking about, mainly – but he does talk about recreating history, too).
I remember asking ‘why’ in maths class once. And only once. Because the answer was ‘I don’t know. You don’t need to know why. Just learn it so you can pass the exam’.
So, keep inspiring a sense of wondering and questioning in children. Work on developing their critical thinking. Answer those ‘why’ questions (the real ones, not the trying-to-annoy-the-adult ones) – even if the answer is ‘I don’t know’ – but follow up with ‘let’s see if we can find out’. Let them experiment. And, unfortunately, do your best to work against the current educational paradigms that teach rote learning of facts, not thinking and discovery.
PS I’d be interested to see where this book is catalogued elsewhere. Although the first subject heading in our catalogue is Science – Methodology… it’s Dewey Classification number is 001.9, which relates to the fourth subject heading, Superstition. That said, some of our copies are under 501 – which is a much better fit. (Having said that, if people browsing in the 001.9 area happen to take this out, it might expose them to science, rather than pseudoscience.)
@tracyrowanreads
Reviewed: 2018-01-06
Honestly, I'm embarrassed to admit that I bailed on this about two thirds of the way through. Normally I love Sagan and I was thrilled to find this book on sale at Audible because I'd been wanting to read it, but listening to it was -- through no fault of the narrator, Cary Elwes -- like riding a merry-go-round.  After the first chapters it was all territory he'd covered.  The redundancy of his argument became tedious; every chapter had the same message: Science is the most reliable way of understanding the world. Pseudo-science is foolishness.  And yet Sagan drew this out into nearly 500 pages. If he'd done a book half that size it would have been a trim, compelling argument. He could have done it in an essay!

Each chapter holds some kind of pseudo-science up for inspection and finds it wanting. Sagan spends a good deal of time with UFO-ology, as we might expect, and much of it is taken up with accounts of abductions, discussions about sleep paralysis and dreams.  Sagan belabors his points. His quotes from pseudo-science proponents seem endless, and his argument is always the same: These things aren't provable. Science is the most reliable way of knowing.  The chapters also often seem poorly thought out and rambling, as if no one had edited the work and said, "Carl, you need to stick to your point in this chapter."

In fairness, Sagan is surprisingly respectful of the things that motivate people to believe in the unprovable. He makes the point a number of times that science and religion could be effective partners in bringing people to a greater understanding of our universe. He understands that the desire to hang on to the people we love drives belief in gods and the afterlife.  His account of waking to hear his dead father calling to him made me weep because that happens to me as well, and it's not only heartbreaking, but it makes understandable the wholly emotional desire to believe that there's more to it than a hallucination.

I was disappointed to have quit before the end, but it seemed to me that by chapter 18 I was wasting my time.  I know that pseudo-science, the occult, and the paranormal are not reliable disciplines. I know that the scientific method is the best way we have to understand our world. I didn't need to be told as much over and over for 400+ pages.
@steveinadelaide
There is no doubt that Carl Sagan knew what he was talking about (sadly, he is no longer with us). And what he shares with us about the gullibility of humanity is pretty depressing. This catalog of nonsense that humans have believed (and still believe, in many cases) makes one wonder why we trust our capacity to think well. And, of course, because we know that we tend to think poorly, we have developed principles of critical thinking to compensate for that tendency. And science, which is firmly grounded in principles of careful, critical thinking. Sagan ruthlessly debunks all of these bizarre beliefs, repeatedly illustrating in clear, eloquent language what it means to think carefully about these and other issues in everyday life and society. He also surveys various tools for evaluating the legitimacy of ideas and beliefs.<br /><br />I do have a couple of minor criticism of the book. I did get a bit tired, after about 3/4 of the book of the constant rehearsal of some issues. I understand that the chapters of the book are actually essays Sagan wrote (some with his wife). It may be possible to enjoy this book by dipping into chapters at random rather than reading straight through from cover to cover. Am I was really irritated by his capitalisation of the word Nature - as if it was being constructed as an intelligent entity worth worshiping in some new-agey way. I'm not saying that is what Sagan intended. But it didn't come across as consistent with his generally rational approach.<br /><br />THE DEMON-HAUNTED WORLD is a good read. The biggest problem, of course, is that those who most need to read it probably won't. But at least the rest of us can arm ourselves with good thinking skills to protect ourselves from the nonsense so often foisted upon us - and to help us scrutinise our own beliefs before we base our decisions about life on them.
Item Posts
@revkeith5mo 20d
completed ... on 1998-01-01
@malavolent2y 1mo
completed ... on 2019-12-10
@malavolent2y 4mo
began ... on 2019-09-04
@bmmiller913y 1mo
began ... on 2018-11-18
© 2022 libib.com / All rights reserved