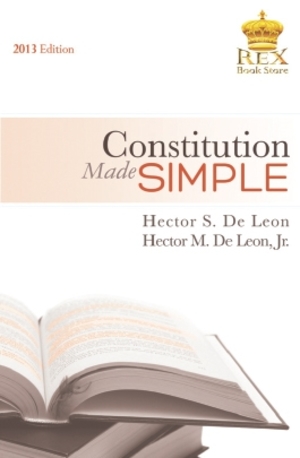 Hector S. De Leon, Hector M. De Leon Jr.
Government in a democracy is established by the people through which they rule themselves. It exists exclusively for their benefit. In a sense, therefore, we, the people, are the government. Every citizen — the man in the street, the housewife, the domestic helper, the laborer, the teacher, the professional, the business executive, the government worker — has a role to play in the government. Each one can play his role much more effectively when he knows how the government under which he lives is organized, how it works, what it can and cannot do, and what his rights and obligations are. The best way to learn the basic features of our government is to study our Constitution as such, not as a part or result of something else. The success of our democracy depends to a great extent upon intelligent, informed, and concerned citizens who accept the idea that “government is their business.” No less than our Constitution recognizes its truth in requiring explicitly that “all educational institutions shall include the study of the Constitution as part of the curricula.” (Art. XIV, Sec. 3[2] thereof.) In this book (originally, Constitution for High School), now on its fourth edition, the authors have attempted to explain, as simply and as clearly as possible in a comprehensive and yet very brief way, the provisions of our new Charter. The aim is to enable the average reader to acquire a working knowledge and understanding of the Constitution even without referring (except where, in few instances, indicated) to the sections of the document itself. However, it is advisable that the student also read the particular provisions being discussed, including the cross references to related sections.