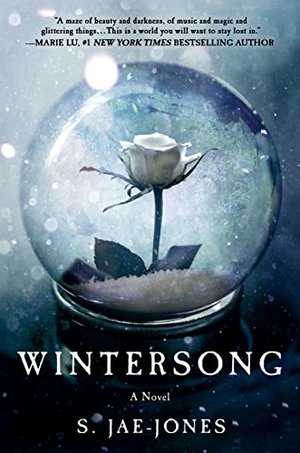 S. Jae-Jones
Beware the goblin men and the wares they sell. All her life, nineteen-year-old Liesl has heard tales of the beautiful, mysterious Goblin King. He is the Lord of Mischief, the Ruler Underground, and the muse around which her music is composed. Yet, as Liesl helps shoulder the burden of running her family’s inn, her dreams of composition and childish fancies about the Goblin King must be set aside in favor of more practical concerns. But when her sister Käthe is taken by the goblins, Liesl journeys to their realm to rescue her sister and return her to the world above. The Goblin King agrees to let Käthe go—for a price. The life of a maiden must be given to the land, in accordance with the old laws. A life for a life, he says. Without sacrifice, nothing good can grow. Without death, there can be no rebirth. In exchange for her sister’s freedom, Liesl offers her hand in marriage to the Goblin King. He accepts. Down in the Underground, Liesl discovers that the Goblin King still inspires her—musically, physically, emotionally. Yet even as her talent blossoms, Liesl’s life is slowly fading away, the price she paid for becoming the Goblin King’s bride. As the two of them grow closer, they must learn just what it is they are each willing to sacrifice: her life, her music, or the end of the world.

I bought this book on Audible on a whim, and !!! boy am I glad I did?  S. Jae-Jones has that lyrical way of writing that makes my heart flutter and this is a long but also hauntingly gorgeous story and I loved it.

1.  I’ve seen some mixed reviews of Liesl, but I really liked her.  Liesl was a fluid character.  She isn’t quite sure what she wanted or who she was, a side-effect of constantly living in the shadows.  I liked Liesl’s imperfections and passionate fits.  At times, she was a commanding woman and at others a spoiled brat and all versions of herself felt true.

2.  It’s always enjoyable when authors incorporate entities as though they are breathing characters.  My personal favorite is theatre, but in Wintersong, the music is a character.  Liesl, the Goblin King, and other minor and supporting characters all twist and turn around compositions and chords until the book itself is a dance.

3.  As I said in the intro bit, this book is stunningly written.  S. Jae-Jones writes with grace and precision, and it is beautiful.  Few YA authors write this way, and many who attempt it go overboard.  This novel balances storytelling and stunning prose wonderfully.

4.  I found the world building breathtaking.  It is one thing to create the whimsy of the market or the tension of the inn, but the Underground took on a life of its own and wrapped me in its clutches.  The rules of magic came with consequences and the goblins themselves played dutifully by the laws of the world.

5.  I think that if you’re going to set a story in a non-English setting, the language used becomes very important.  S. Jae-Jones incorporates German into her writing with flawless ease, using it as a world building element, a character definer (Der Erlkönig), and like frosting on the top of this already glorious cake.

6.  In a world filled with countless retellings, the story of the Goblin King is refreshingly original.  Yes, we’ve all see Labyrinth and this is not quite that story (at no point was I disappointed by the lack of David Bowie). It was a different story, but it stands as one of the best retellings I’ve ever come across.

7.  The characters here do no cease to surprise.  Käthe came in to the story flat and shallow, but turned out to be a ray of sunshine while Liesl’s little brother was also more than he appeared.  We see their stories through a looking glass, and yet, their characters are loud and impressive.  And these two are minor characters.

8.  Wintersong has incredibly slow pacing, which may be a turnoff for some.  I actually enjoyed the leisurely gait… it let me soak in the world more.

9.  This story is an excellent example of how love at first sight, or young love, can still be complicated and awkward.  Lisel and Der Erlkönig‘s stories have been entwined since her childhood and in the first chapter you see his love for her… and yet nothing is simple.  Their love is complicated and that is how love ought to be.

10.  For those of you who enjoy audiobooks, Eva Kaminsky’s reading of Wintersong was incredible.  Her voice was filled with yearning and questioning that was perfect for Liesl and I recommend this audiobook highly.

To be perfectly honest, up until the moment I impulsively bought it, Wintersong was a soft “I’ll get to it eventually, maybe” for me.  This book is much too good for that.  I thoroughly enjoyed every word of this story and found myself completely captivated.  By all means – set forth and devour this beautiful novel. It’s well worth it.