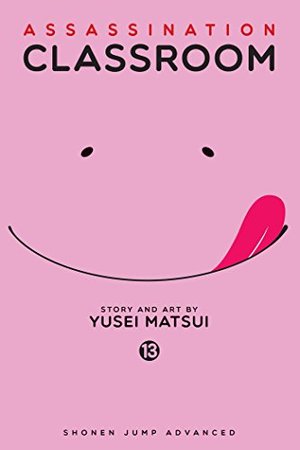 Yusei Matsui
What does a pathetic class of misfits have in their arsenal to combat their schoolteacher’s alien technology, bizarre powers and...tentacles?!Ever caught yourself screaming, "I could just kill that teacher"? What would it take to justify such antisocial behavior and weeks of detention? Especially if he's the best teacher you've ever had? Giving you an "F" on a quiz? Mispronouncing your name during roll call...again? How about blowing up the moon and threatening to do the same to Mother Earth—unless you take him out first?! Plus a reward of a cool 100 million from the Ministry of Defense! Okay, now that you're committed... How are you going to pull this off? What does your pathetic class of misfits have in their arsenal to combat Teach's alien technology, bizarre powers and...tentacles?! The Grim Reaper sets up a lethal trap that buries Mr. Karasuma and Ms. Vitch alive. Will Mr. Karasuma’s repressed feelings surface before he and Ms. Vitch do? And how will Mr. Karasuma face Death? Then, despite his vow to destroy the planet in March, Koro Sensei offers career counseling to his students. Nagisa’s professional goal raises some serious issues. And finally, it’s time for the next school festival showdown. Class A and Class E compete for the most customers. If they build it, will they come…to the top of 3-E’s remote mountaintop?