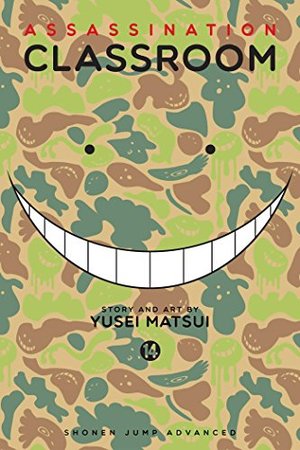 Yusei Matsui
What does a pathetic class of misfits have in their arsenal to combat their schoolteacher’s alien technology, bizarre powers and...tentacles?!Ever caught yourself screaming, "I could just kill that teacher"? What would it take to justify such antisocial behavior and weeks of detention? Especially if he's the best teacher you've ever had? Giving you an "F" on a quiz? Mispronouncing your name during roll call...again? How about blowing up the moon and threatening to do the same to Mother Earth—unless you take him out first?! Plus a reward of a cool 100 million from the Ministry of Defense! Okay, now that you're committed... How are you going to pull this off? What does your pathetic class of misfits have in their arsenal to combat Teach's alien technology, bizarre powers and...tentacles?! Lowly Class E and elite Class A compete for the most customers at their school festival booths. So far, the students of Class E are holding their own, despite their location on the mountaintop. Then a parade of familiar faces, some welcome and some…not so much…drop by with surprising consequences. Will Principal Asano’s son Gakushu be able to maintain his position as the illustrious leader of Class A? Who could possibly replace him in hopes of leading the students to victory and the subjugation of the weak…?