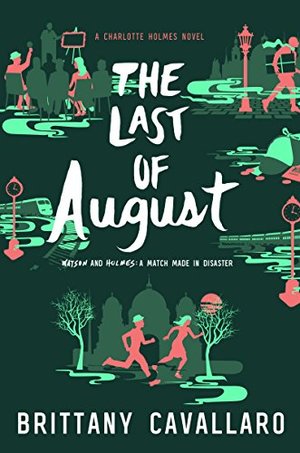 Brittany Cavallaro
In the second brilliant, action-packed book in the Charlotte Holmes trilogy, Jamie Watson and Charlotte Holmes are in a chase across Europe to untangle a web of shocking truths about the Holmes and Moriarty families.Jamie and Charlotte are looking for a winter break reprieve in Sussex after a fall semester that almost got them killed. But nothing about their time off is proving simple, including Holmes and Watson’s growing feelings for each other. When Charlotte’s beloved Uncle Leander goes missing from the Holmes estate—after being oddly private about his latest assignment in a German art forgery ring—the game is afoot once again, and Charlotte throws herself into a search for answers. So begins a dangerous race through the gritty underground scene in Berlin and glittering art houses in Prague, where Holmes and Watson discover that this complicated case might change everything they know about their families, themselves, and each other.

@ruthsic
Reviewed: 2018-01-25
The Last of August brings us to the aftermath of the events of A Study in Charlotte (I would advise a reread for those with weak memories like me). Charlotte Holmes is now being targeted by Lucien Moriarty for her hand in his younger brother August's downfall, and this has all but declared war among the Holmeses and the Moriartys. Meanwhile, James dreams of a happy winter break spent exploring London with his best friend, but she and her family have other plans. Her uncle Leander, who was on an espionage mission/investigation, goes missing and with her mother sick, she is the one who sets out to find out what went wrong on the mission.

Since it is mostly James's POV, we get the bare minimum of what is actually happening. Most of it is spent in James feeling insecure about his place in her life and she afraid that she might lose his interest. Their relationship had advanced beyond friendship at the end of A Study in Charlotte, but neither of them knows what to do on this shaky ground of a partnership-with-feelings. Charlotte, for her part, still keeps a lot of secrets from him, and even though it later comes to light why (through her two POV chapters) it still feels like they run around the same train of thought over and over again. As a result, the plot pacing was considerably slowed and did not hold the same excitement as that of the previous book. Sure, there was undercover spying, teaming up with August (!) in Berlin, but it did not really feel fully like a Holmes-Watson pairing. On the other side, though, it also establishes their relationship as something built rather than a result of their elders' orchestrations. You see why she chooses him, and why he chooses her, even though they could have anyone else in the world - they are sort of co-dependent on each other but also strongly and fiercely protective of one another.

The plot largely focused on the enmity and fragile peace between the two families, and as such, it did not have the intrigue of a mystery but rather a complex plot involving dubious loyalties and a pervasive sense of distrust. In terms of tone, it was quite different from the first, and while I also liked this one, I am not sure it satisfactorily delivered on the build-up from the first - that bar was set high, and this did not leap over it.