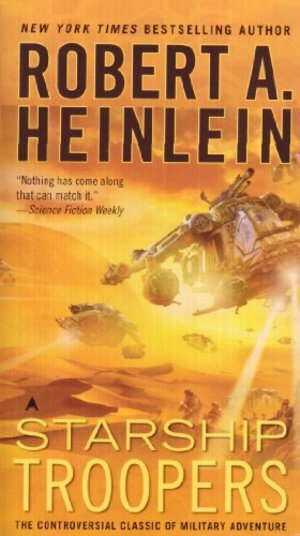 Robert A. Heinlein
In one of Robert Heinlein's most controversial bestsellers, a recruit of the future goes through the toughest boot camp in the Universe--and into battle with the Terran Mobile Infantry against mankind's most frightening enemy.

@aliceqpenguin
Reviewed: 2020-05-27
Oh Heinlein. Only he can turn something I would never in a million years voluntarily read about (military life) and make it wildly interesting. A classic of great proportions.
@avarisclari
Reviewed: 2020-03-09

This is a fantastic read and once again shows how many people will say things without looking to the original source. It doesn't promote fascism and is one of Heinlein's finest works.

@necrobane84
Reviewed: 2018-06-03
A book with interesting views on morality and society. Unfortunately for me, it's one of the few books I've read where I think the movie did a better job getting the point across. It was definitely worth the read, and a solid peace of classic science fiction.
@alex1024
Reviewed: 2018-03-30
This is the prototypical military science fiction book, emphasis on the military. It was pretty engrossing. For what it's worth, I saw the movie a long time ago, and I honestly couldn't connect one thing from my fuzzy memory of the movie to the book. They did fight some sort of bug alien I think, so there's that.
@OlliesAddiction
Reviewed: 2016-08-02

With all of the Military Sci-Fi with mech suits and upgraded armor that I have been reading, I decided that I should revisit my past and re-read Starship Troopers by Robert Heinlein. This is one of those controversial science fiction stories that seems to rub some people the wrong way, but I love how the author incorporated what was a current event issue, suspension of nuclear testing, into a futuristic book explaining his world view to all his detractors. Please remember this is also the original 1959 BOOK, and not the 1997 MOVIE that was Starship Troopers only in name, but still a good movie based on its own strengths.

The book centers on Johnny Rico’s life, his entry into the Terran Federation’s Mobile Infantry, his reasons for joining, and through flashbacks to his high school History and Moral Philosophy course, to explain the political environment of the 22nd Century. Basically, in the future, the right to vote is earned only through voluntary military service. The world is still a democracy, military service is the only restriction on voting, and you can’t still be in the military to seek office or cast your vote, limiting the controls of the military in actual elections. Through Rico’s enlistment, boot camp training, and officer’s school you see how the world reacts to alien conflict in the “Bug War”, and how Rico starts with no sense of civic responsibility in high school to responsible for all his troopers in Rico’s Roughnecks at the end.

If you want to get into the political firefight over the book, there are plenty of sites just a Google search away that will be happy to accept another person to the conversation. I personally take the book at closer to face value as a great story, with an interesting political overtone, that continues to play out today as much as it did during the nuclear proliferation during the 60’s. Now, instead of nukes, we are discussing how far we are willing to go to stop Islamic terrorism. Trying to decide today whether continued larger actions in the Middle East are a deterrent for more attacks, just as the Mutual Assured Destruction mentality of nuclear buildup was a deterrent during the Cold War. Many of the ideas from the book can continue to be adjusted as thought starters for current events, but you can also enjoy it for being just a good, Hugo Award winning, classic sci-fi story.

This book is one of the first, maybe even is the first book to have an exoskeleton mech suit show up in a military science fiction setting. In Context, Stan Lee didn’t come up with Stark’s Iron Man until 4 years later. I know I have never read anything that was older that Starship Troopers that mentions exo-suits that strengthen the people that are wearing them. Just think of all the books, movies, and even video games can trace their suits back to here in 1959.

I would easily recommend this to any of my Military Sci-Fi friends, and know that they would be intrigued by the history of the story. If nothing else you can cross another Hugo Award winning book off your bucket list, because just like my favorite line states “Come on you apes, do you want to live forever?”.