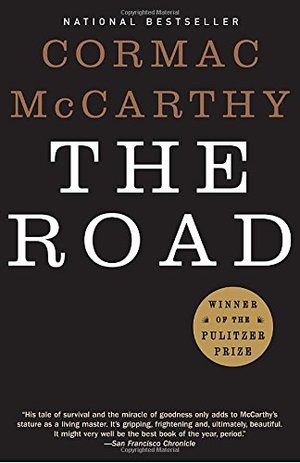 Cormac McCarthy
NATIONAL BESTSELLERPULITZER PRIZE WINNER National Book Critic's Circle Award FinalistA New York Times Notable BookOne of the Best Books of the YearThe Boston Globe, The Christian Science Monitor, The Denver Post, The Kansas City Star, Los Angeles Times, New York, People, Rocky Mountain News, Time, The Village Voice, The Washington PostThe searing, postapocalyptic novel destined to become Cormac McCarthy's masterpiece.A father and his son walk alone through burned America. Nothing moves in the ravaged landscape save the ash on the wind. It is cold enough to crack stones, and when the snow falls it is gray. The sky is dark. Their destination is the coast, although they don't know what, if anything, awaits them there. They have nothing; just a pistol to defend themselves against the lawless bands that stalk the road, the clothes they are wearing, a cart of scavenged food—and each other.The Road is the profoundly moving story of a journey. It boldly imagines a future in which no hope remains, but in which the father and his son, "each the other's world entire," are sustained by love. Awesome in the totality of its vision, it is an unflinching meditation on the worst and the best that we are capable of: ultimate destructiveness, desperate tenacity, and the tenderness that keeps two people alive in the face of total devastation.

@tposton15
Reviewed: 2022-01-04
Disturbing, usually needlessly so, and monotonous; redeemed by its surprisingly quick pace and occasional elements of existential allegory.
@oncearoundbooks
Reviewed: 2020-06-17
I liked this, but wasn't totally blown away by it. Though I read it in one day when I was sick in bed and delerious with fever. Maybe I should give it another go?
@mageeslibrary
Reviewed: 2016-12-28

Beautifully written- almost poetic like- but it drags so much.